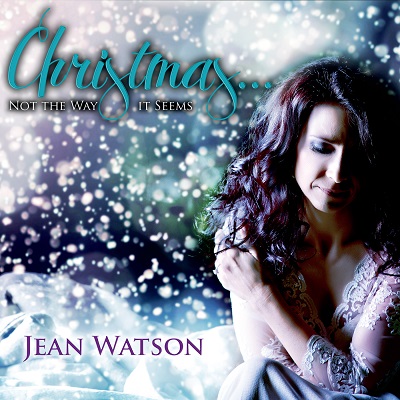 Shadowlands recording artist Jean Watson’s rendition of the beautiful 18th century Burgundian Christmas carol, “Pat a Pan,” is one of eight songs featured in An NRT Christmas, Volume One, New Release Tuesday’s 2014 collection of Christmas songs that will usher in the spirit of the holidays.

Watson’s “Pat a Pan” will be offered as a free download from now through December 24, alongside holiday offerings from Aaron Shust, Jason Gray, Cloverton, John Schlitt (of Petra) and more.

Christmas…Not The Way It Seems. Grammy Award-nominated producer Billy Smiley produced the song, which is part of an 11-song collection of angelic and classic Christmas favorites which also features the talents of legendary Gospel Music Hall of Famer and guitar virtuoso Phil Keaggy. Watson is the first artist signed to the indie Shadowlands label.

Watson’s performances during the Christmas season will include CBN’s 700 Club and CTN’s Bridges, Cornerstone TV’s Real Life and LeSea TV’s The Harvest Show.

Watson, who resides in Michigan, enjoys a large fan base across the U.S. and throughout the United Kingdom. She also hosts a daily inspirational radio show, Jean Watson, which airs across Ireland. Watson will feature all of the tracks from her new CD on her radio show in November and December.

For more information about Watson, “Pat a Pan” or Christmas…Not The Way It Seems, visit jeanwatson.com.

About Christmas…Not the Way It Seems:

Destined to become a Yuletide classic, Christmas…Not the Way It Seems blends time-honored, beloved carols like “Do You Hear What I Hear,” “Angels We Have Heard On High” and “The First Noel,” with melodic renditions of less familiar holiday songs like “Pat A Pan,” “Coventry Carol” and “Lo How A Rose,” along with Watson’s newly-penned Christmas hymn, “Not The Way It Seems.”

“Jean is a gifted soul and person. Very seldom do I find someone with incredible gifts in songwriting, singing, and violin all in one person,” says Grammy Award-nominated producer Billy Smiley, who, in addition to his Grammy nominations, has produced more than 100 albums and 30 No. 1 songs, and is a founding member of legendary Christian rock band WhiteHeart. “It has been a pleasure to see her wings unfold throughout the recording process. It will be so exciting for the world to see and hear this beautiful talent!”

Musically, the album employs rich, emotive orchestration which, when combined with Watson’s ethereal yet resilient vocals, is reminiscent of such world music artists as Enya, Maire Brennan, Clannad and Kristen Getty.

For more information about Watson or Christmas…Not The Way It Seems, visit jeanwatson.com.

Classically trained violinist Jean Watson has recorded six albums since 2002, including her latest, Christmas…Not The Way It Seems, and has been honored four times as the Best Female Praise and Worship Artist USA by the U.K. Christian Music Alliance.

Born into a musical family, Watson’s classical training began when she was still a young child. Early on she displayed an affinity for the violin, but as time passed she became equally recognized for her wistful, ethereal vocals. As an adult, music was set aside for Watson to focus on her responsibilities as a wife and mother. Her marriage ended in divorce and she found herself in a time of deep depression and hopelessness. At her lowest point, she cried out to God.

A short time later, the landlord of the house where Watson lived with her four children stopped by to bring her family a Christmas tree. As he was setting it up, he heard some Christmas carols that Jean recorded on a cassette.

“‘What is that?, he asked. ‘That’s you? I don’t know what you are doing with your life, but THAT is what you’re supposed to be doing with your life.’ Watson remembers. “He told me to keep my rent money and take it to a recording studio and make a CD.’ He had no idea that his generosity was an answer to my prayers.”

Her landlord’s kind financial gift led to Watson’s first CD in 2002 and set her on the path that she continues following today, which has taken her around the world performing music from her six albums.

Watson can be heard worldwide on UCB Radio Ireland where she hosts a daily inspirational radio program, Jean Watson, which she records from her Michigan home studio. Watson has logged thousands of miles traveling to perform churches, prisons, coffee houses, homeless shelters and concert halls. When she is not on the road, she plays violin in the Kalamazoo, Mich., Symphony.

Watson is a newlywed, having recently married Mark Roberts, a chaplain in the United States Air Force. She lives in Lawton, Mich., and has four children:Charlie, Andrew, Grace, Katharine, daughter-in-law Emily, and grandson Chase.

For more information on Watson or Christmas…Not The Way It Seems, visit jeanwatson.com or like on Facebook at Facebook.com/JeanWatsonMusic.

Shadowlands Music is a division of Best Media Group, a multi-entertainment company focusing on World Music and Organic Pop. Shadowlands Music produces music with a creative Indie mindset, and offers artist development, as well as both digital and physical distribution. To contact Shadowlands Music, email .