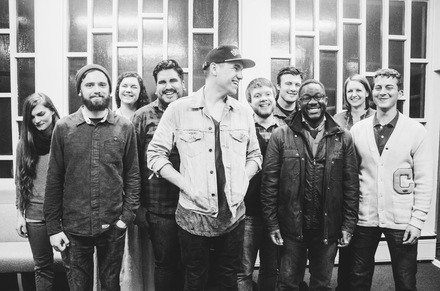 Tooth & Nail’s Kings Kaleidoscope recently released their LP and label debut to multiple 5-star reviews and charting success. The album, Becoming Who We Are, debuted on four Billboard charts following street week breaking into the Top 5 of the Heatseekers chart, Top 10 on the Christian Albums chart as well as charted on the Digital Albums and Billboard Hot 200 Albums charts.

Kings Kaleidoscope’s album has been receiving much praise from the media giving the album multiple unprecedented 5-star-reviews. Online site JesusFreakHideout actually had three 5-star-reviews for the album, which was a first for the 18-year-old site. Here’s what the media has to say about Becoming Who We Are:

“Kings Kaleidoscope’s Becoming Who We Are has VIBE. A fantastic vibe. This album sounds smooth, clean, and has great tones from guitars, horns, bass, drums, some electronic do-dads, and maybe even a xylophone. It just sounds great, but that’s just how it sounds. Lyrically it is thoughtful, yet challenging and encouraging.” –All About Worship

“To point out all the highlights of this album would make for an extremely long read, because the entirety of the album is a highlight.” -JesusFreakHideout 5-star-reviews

“From start to finish, this album is perfect.” -JesusFreakHideout 5-star-reviews

“Cutting straight to the point, Becoming Who We Are is possibly the best worship album ever made by anyone not named David Crowder, and even that is debatable.“ -JesusFreakHideout 5-star-reviews

ABOUT KINGS KALEIDOSCOPE AND BECOMING WHO WE ARE: The Seattle-based alternative worship band has a strong history with 4 EP’s released with their unique, high energy with classic and modern hymns. Kings Kaleidoscope is 10 members strong building on the sounds of drums, bass, keys and guitars, by adding a vast array of orchestral elements including violins, cellos, woodwinds, trombones, trumpets and vibraphones. With a strong hip-hop influence and an energy that nods toward The Mars Volta, the band is able to capture the extremes of dynamics, and project emotion like few others can. The band hopes with the new album Becoming Who We Are will satisfy and audience seeking creativity, musicality and authenticity not only in the music but Who the music is created for.