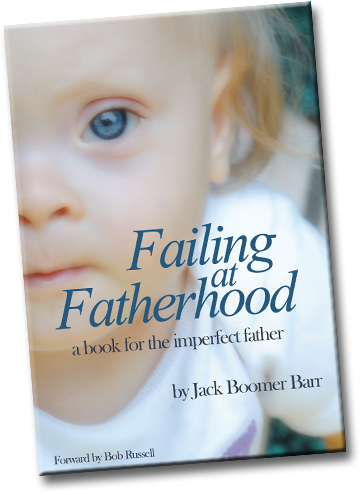 Author and speaker Jack Boomer Barr has released his Failing At Fatherhood book today. Below is an excerpt from the book, what people are saying about the book, the links to purchase the book, and more.

An Excerpt from Failing At Fatherhood

I hear her breathing—that raspy up and down cadence I have listened to for the past three weeks.  The relentless noise makes it impossible to sleep.  It is 2:00am and I have been listening to this creature agonize me for the past two hours.  Why do I fear her so much?  She is my own flesh and blood, yet I lie here silently wondering if I will be here in the morning.  What kind of father am I?  What kind of father secretly plots opportunities to quietly disappear in the middle of the night instead of facing another day with his daughter?  For two weeks I prayed for God to heal her, but of course he ignored my desperate cries.  What kind of God would allow my daughter to suffer when I offered my own life to heal her? God and I both know the future she will have if she continues to live.  She will be mocked, pitied, ignored, and told how she is different from everyone else.  When people look at her, they will only notice her differences and not her similarities.  The Down syndrome parents I read about are only tricking themselves into thinking their child is normal.  All of my friends have normal children who they can watch grow and develop, but not us.  My daughter will never go to college, never get married, never have children, and never experience the intimacy of being touched by someone that truly loves her.

What some are saying about “Failing At Fatherhood”

“Heartbreaking yet hopeful, Failing at Fatherhood is a compelling, honest look at one man’s struggle to become the father that he wants to be.”
– S. A. Bodeen
Award Winning Children Author
Author of The Compound and The Gardener

“Raw.  Emotional.  Honest.  That’s Jack Barr, wearing his emotions on his sleeve, in his book Failing at Fatherhood.  If you’ve ever been traumatized by the birth of an imperfect baby, if you’ve ever found yourself in the pit of despair questioning God and wondering how you will cope, the story of Jack, his wife Jana, and their precious little Marley will not only touch your heart, it will wrench it.  But there is hope in their story—the hope that only a good God can bring.  Read Failing at Fatherhood and prepare to be changed.”
– Dr. Woodrow Kroll
Former President and Senior Bible Teacher of
BACK TO THE BIBLE INTERNATIONAL

“Failing at Fatherhood is artfully and candidly written to evoke painful, but therapeutic memories of when we, as fathers, may have fallen short of the high standard set by our Heavenly Father.  It reminds us of the important calling we have as dads, especially in the 21st Century when fathers are less and less a part of the family and contribute less and less to helping our kids grow to be responsible, mature, Christian adults.”
– Bob Russell
Retired Senior Minister, Southeast Christian Church

About Jack and Jana Barr


Jack and Jana Barr are missionaries in Bangkok, Thailand. Before their first date, they both knew God was calling them to serve overseas. After completing their undergraduate degrees at Johnson University, and their graduate degrees (Jack M.Ed. Regent University, M.Sc. Canisius College/ Jana M.A. Lee University) they flew to Bangkok for the first time. For the past nine years they have served God by teaching at the International Community School in Bangkok, Thailand.

Three years ago, Jack and Jana did not know God would use their daughter Marley, to forever alter their life plan. Marley was born with Down syndrome and that event sent Jack crashing into a sea of depression. “I could not overcome the question of, Why us God?” Since that day, Jack and Jana have rerouted their plan to align with God’s plan. They started, If They Had A Voice, an awareness campaign that focuses on Down syndrome abortions. Their story has been featured on CNN, CNN Mexico, Life Action News, and The Insight Channel. Jack is also releasing his first book November 10th, Failing at Fatherhood, which has been endorsed by Bob Russell, S.A. Bodeen, and Woodroll Kroll. Jack & Jana had a simple plan for their future, but God has forced them to trust in HIS plan.