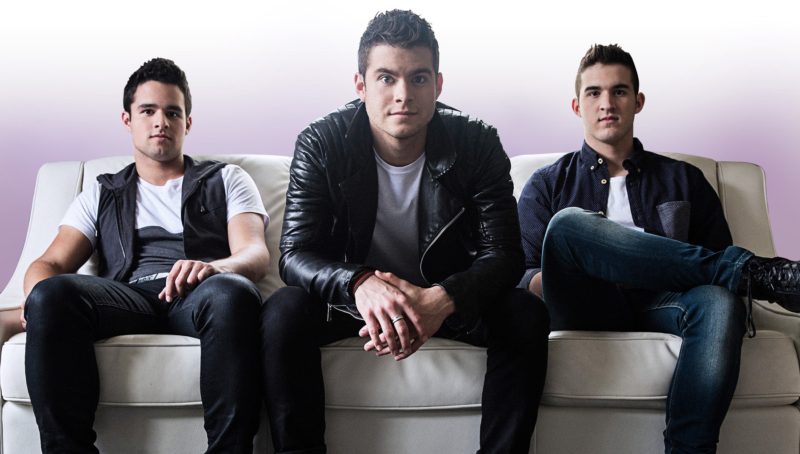 OBB is a quite admirable band. I gained a whole new level of respect after I saw this video of the band attending a high school prom with three fans. Then, I met them recently at the Dove Awards, and let me tell you – they are some of the nicest guys! OBB stands for “Oswald Brothers Band” – if you were wondering. They have been on Winter Jam, so you may have caught them there. If not, they’re also on the “While We’re Young” tour with 1 Girl Nation, so we’ll have a link below to their website for you to check that out.

They just released a new album called The Bright Side following their self-titled EP released in early 2013. I’m excited for them, and after the journey they’ve had, staying humble would normally be a noticeable problem, but with these guys it isn’t. They have done some pretty awesome things, and if you don’t know about them, you need to educate yourself! So, without further ado, here is my top-pick take on their new album, The Bright Side.

Song #2 – “Who Cares If We’re Dancing”
This song is a top pick off the album, because it is a surefire party song. Perfect for car rides with the windows rolled down, or celebrations after a great day, it is definitely a mood-lifter. (Is that a thing?!) I like to think I’m good at dancing, but with this song, who cares how I am doing? If you like this song, let me know so that we can have a cyber dance party! Okay, but seriously – this is the perfect song for a friend that may not be Christian, but enjoys pop songs. It reminded me of that One Direction song “Best Song Ever”, so if you like One Direction influences, check this out. I’m sure you’ll love it!

Song #3 – “All Eyes On You”
I really, really like this song. It’s been my jam the past few weeks, and I think it’s a lot like TobyMac’s song “Steal My Show”. The message reigns true as both songs are a prayer to God to take the attention off of themselves and give the glory to God. I think that it is probably hard as a band to stay humble all of the time, and it’s gotta be hard to give all the glory to God in those times. Even in our daily lives, we struggle with this as teens. When our crush acknowledges our existence, or when we finally ace that math test, it’s a brag-worthy experience. Yet, we need to stay thankful to God despite the excitement!

Song #5 – “That Kind of Faith”
This song is my favorite off the album because of how it sounds, but more importantly, because of the message of it. It sounds an awful lot like a One Republic or Imagine Dragons song, and the band did an amazing job with this one. (Props to you guys for hitting those high notes!) The song is calling out to God that the guys want the kind of faith of a mustard seed; the kind of faith that makes you uncomfortable, that makes you do the unthinkable. There’s something about this song that makes me smile, because this is the kind of faith we need to have in this falling world!

Song #7 – “Bright Side”
If you were paying close attention, you’d see that this is the song that the album is titled after. I feel like this is a perfect pick-me-up when you are feeling discouraged, as it encourages being an optimist – but not in the annoying, rainbows-and-sunshine way. Sitting here now, I’m dealing with a lot, but this song offers such a positive vibe that I feel a lot better. In the midst of the trials we often face today, I encourage you to listen to this. I promise it will help you out!

Song #8 – Looking For A Girl
Okay, ladies – looking for a how-to guide on attracting Christian guys? Here you go. Boys – looking for a song that you should base your relationship expectations off of? You can thank the band for this one! I love that they put this on the album, because it is so refreshing to hear a boy band promoting true love instead of lust. A majority of songs these days are about giving everything to your boyfriend or girlfriend. This song is the polar opposite, saying “I wanna see her put Someone before me” and then “I’m okay with being second place, as long as He is standing center stage.” I’d say that that’s the kind of thing you should be putting into your heart – boy or girl.

Song #11 – “My Relief”
My last pick is such a relatable song to me that it’s almost like the guys heard my prayers and wrote a song from them. I highly encourage you to give this song a listen. After a long day at work or school, you can freely praise God to this one. It’s a prayer of praise to God about taking the weight off our shoulders and being more than enough for us – being our relief. Listen to this song on repeat and let God work in your life with this message. I wish more people let this into their heart rather than the songs you often hear on the radio these days!

Overall, I was highly impressed with this album. It’s got a series of messages in it that everyone can relate to, and this is an awesome album to kick off Fall. Oh, and if you want to see my interview with the guys at the Dove Awards earlier this month, stay on the lookout for it to be on YouTube! If OBB is reading this, give yourselves a pat on the back and keep on keepin’ on. I love what you guys are doing!