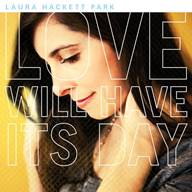 Dove-nominated singer/songwriter and accomplished worship leader Laura Hackett Park released her second and 5-star-acclaimed album, Love Will Have Its Day, Oct. 21 from Forerunner Music, the official record label of the International House of Prayer of Kansas City (IHOPKC). The recording spent time at No. 1 as the best-selling Christian/Gospel album at iTunes® during release week and wrapped up the week as the second bestselling SoundScan Christian/Gospel Digital Album (LeCrae was No. 1). The recording also lands in the Top 10 on the UK’s Official Christian & Gospel Albums Chart at No. 8 this week as reported by the Official Charts Company.

“We are both humbled and encouraged by the positive outpouring of support for Laura and her latest musical offering, Love Will Have Its Day,” said Forerunner Music President Nick Syrett. “We have had the privilege of watching Laura develop not only as a musician, but as a worship leader—and the opportunity to surround and involve Laura with a team of amazingly talented and experienced industry folks, like producers Brown Bannister and Ben Shive, has resulted in a project that has truly been blessed from the start.”

With the release of Hackett Park’s new second full-length studio album, following her recent wedding ceremony with fellow worship leader and labelmate Jonas Park earlier this month, Love Will Have Its Day continues to garner praise from music industry critics. In addition to being described as “a profound listening experience” (NewReleaseTuesday.com) and “music for personal reflection and worship” (Worship Leader Magazine), Hackett Park has been lauded for her “ability to get into the issues of life” (Hallels.com).

Soul-Audio.com adds, “Throughout the whole of Love Will Have Its Day, the artist does not shy away from speaking the truth of life, acknowledging its painful hardships that are bound to come our way. Yet, she’s also very quick to remind listeners of the greater truths of the faith, constantly bringing the light of Christ back into focus and shifting listener’s attentions from the situations to the Savior. And she does so with some stirring musical work and a powerful voice, two elements that are bound to take this rising artist far.”

Married during a private ceremony for family and friends in Kansas City, MO, home to IHOPKC, the songs from Laura’s Love Will Have Its Day are quite personal, born of the events of people in Laura’s life. “Got Something Going On” was written for her new husband as a testimony to their collective perseverance, while “Beautiful Heart” was written for a singer friend who had a vocal injury and “Lift Up Your Head” was inspired by a friend suffering from chronic pain. Drawing the title of the album from “Lift Up Your Head,” Laura sings, “Breathe, darling, breathe. It’s not yet time for you to leave. Love will have its day. Lift up your head. Turn your face to the rising sun while you wait, while you wait for redemption to come.”

Produced by legendary, multiple GRAMMY and Dove Award-winning producer Brown Bannister in collaboration with noted producer/songwriter Ben Shive (Brandon Heath, Bebo Norman, JJ Heller, Andrew Peterson), the full, 12-track album is armed with strong, thematic songwriting and emotional vocals that finds Laura exploring a much broader range of music than ever before, using a full musical palette to convey the truth of its theme: if we can walk through this life anchored in Christ, then in every situation we know that love will have the final word, and we live with hope.

About Laura Hackett Park:
Growing up in the house of prayer, Laura was surrounded by music. Songwriting came naturally for her, and she wrote her first song at the age of eight. She later attended the Conservatory of Music and Dance at the University of Missouri-Kansas City to develop her songwriting skills and graduated with a degree in music theory. Laura now teaches voice classes at the Forerunner Music Academy, which is part of International House of Prayer University, and continues to lead worship at IHOPKC’s 24-hour prayer room each week, which is streamed LIVE to over 175,000 people a month. Her motivation for music and songwriting comes from a desire to draw people back to God. Laura’s songs and vocals have been featured on many different albums in the IHOPKC community. Her first full-length solo album released in the fall of 2009, followed by her single “I Put On Christ (The Battle Is Raging),” which gained recognition through the International House of Prayer’s Onething young adult conferences. Visit Laura’s website at www.laurahackett.com.

About Forerunner Music:
Forerunner Music is the official record label of the International House of Prayer of Kansas City, MO, an evangelical missions organization centered on 24/7 worship and prayer. Having released more than 150 albums since its inception in 2001, the label has produced records for artists such as Misty Edwards, Laura Hackett, and Matt Gilman. Forerunner Music albums have reached as high as No. 9 on the Billboard charts and No. 1 on iTunes’ Christian & Gospel charts. Visit forerunnermusic.com for more information.

IHOPKC includes a university (IHOPU) with ministry, music, media, and missions schools. The organization is committed to justice and compassion outreaches involving human trafficking, inner-city programs, and adoption. IHOPKC’s vision is to work in relationship with the wider Body of Christ to serve the Great Commission, seeking to walk out the two great commandments: to love God and people. The International House of Prayer is an evangelical missions organization that has a growing community of about 4,000. Visit www.ihopkc.org for more information.