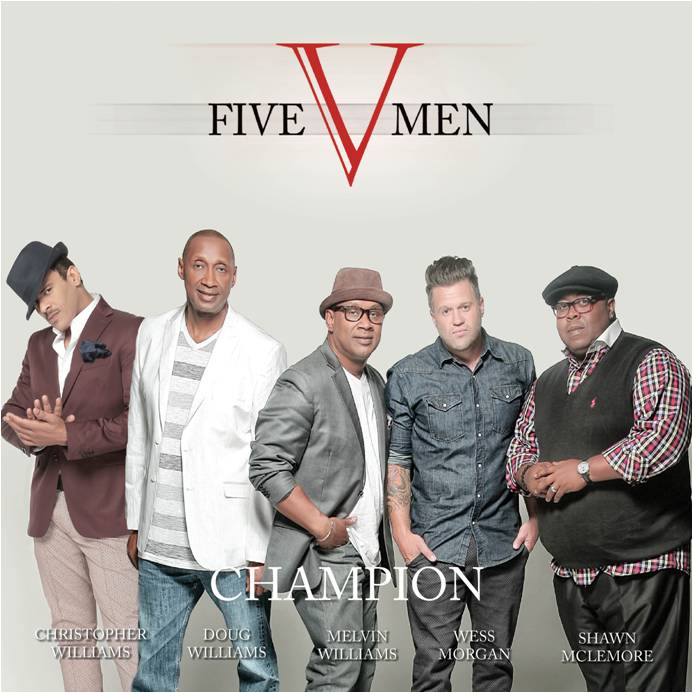 “Out of all of my years in the music industry, this Five Men project has to be one of the most exciting and exhilarating projects that I’ve ever been a part of,” said Doug Williams. “The coming together of this phenomenal group of guys has been nothing short of a miracle. What I’m most proud of are the results. I sincerely feel in my heart that this album, “CHAMPION” by Five Men is truly one for the ages.”

“Working with Five Men has been an incredible experience,” said Morgan. “Five Men is a group of guys who have had their share of ups and downs.  Through melodies and instrumentation, we all have poured our hearts into a package that will be presented to all walks of life so that they can be encouraged, find hope and find the best of their lives. The greatest is ahead for all humanity and our message portrays that.   I am honored to be a part.”

“Five Men embodies a major blessing with a brotherly twist to agree and decree to worship and praise His matchless name while watching this gospel gumbo of voices lend a different twist on the music waves in hopes to help somebody or just join in and praise,” said Christopher Williams.

“This album has taught me to work with brothers who really love God,” said McLemore. “This album will cover many areas, and I’m so glad to be a part of this champion record.”

Five Men continues the promotional tour for ‘Champion’ with stops planned at radio and television across the country. Stay tuned for the latest on Five Men.

Doug Williams is the youngest member of gospel legends, The Williams Brothers. Doug became a member of this Grammy nominated, Stellar Award winning famed gospel group at the age of five. Today, he is considered one of Gospel music’s premier artists. Doug and his brothers have released 21 top 10 albums on Billboard, which includes five No. 1 records and have received seven Grammy nominations and numerous Stellar Awards. Doug has maintained a highly successful career for over 40 years that includes performing, writing, arranging and producing with or for some of the biggest names in music. This list consists of Stevie Wonder, Jerry Lee Lewis, Patti LaBelle, Kirk Franklin, Charlie Pride, BeBe & CeCe Winans, The Mississippi Mass Choir, James Taylor, Mary Mary, Donnie McClurkin, Aretha Franklin, Brandy, Al Green, and many more. He is responsible for writing several of The Williams Brothers’ biggest hits, which some are now classics worldwide.

Gospel recording artist Shawn McLemore has felt a calling on his life to spread the word of God since he was a child. The Los Angeles native grew up in the church under strong tutelage. In addition to pursuing a musical career, Shawn is also an accomplished stage actor, staring in productions that have toured across the country. Today, Shawn continues to proclaim the indelible Gospel through music. He is currently enjoying success from collaboration with fellow artist James Fortune on the hit single, I Believe, which reached number one on the Billboard gospel chart. In conjunction with that success, Shawn has released his spiritually uplifting fourth album, Any Minute Now, One Percent Miracle, on the Black Slope Music label. Previous music releases by the gospel singer include Wait on Him, Stand – The Shawn Mac Project, and Sunday Morning – The Live Experience. With his latest work, Any Minute Now, One Percent Miracle, Shawn endeavors to help draw more people closer to God.
About Christopher Williams:

Christopher Williams, who emerged during the late 1980s as a recording artist for Geffen Records, has scored many hit singles, notably “Promises, Promises” (1989), “Talk to Myself” (1989), and “Every Little Thing U Do” (1993). The single “I’m Dreamin'” (1991), from the New Jack City soundtrack, became a #1 single on Billboard’s Hot R&B/Hip-Hop Singles & Tracks charts. After a six-year hiatus from recording music, he returned to the music scene with Real Men Do on the indie label Renegade, in 2001. In between solo pursuits, he has been a contributor to Alex Bugnon’s “As Promised,” with a jazzed up version of Mary J. Blige’s “All That I Can Say”; featured on “In Your World” with Twista & The Speedknot Mobstas, a very up-tempo track on the soundtrack of “Doctor Dolittle”; and on the Cafe Soul All-Stars CD with a single titled “Used To Be.” Williams appeared in the successful motion picture film New Jack City in 1991 and had a cameo appearance in the 1990s police drama, New York Undercover as “the singer,” performing “Stranger In My Life” and a cameo in Gunmen, starring Christopher Lambert and Mario Van Peebles. He has also starred or co-starred in off Broadway theatre productions including A Good Man is Hard to Find, A House is Not a Home, and The Man He Used to Be. Recently, Williams played a main character in the stage play The Clean Up Woman, written by J D Lawrance , and played alongside actress Telma Hopkins and Jackee, appeared in plays Guilty Until Proven Innocent, starring K-Ci and JoJo, and The Man of Her Dreams, starring Shirley Murdock and Dave Hollister of Blackstreet fame, and played the role of “Ned” in the Reuben Rox 2002 B movie “Revenge of the Unhappy Campers.”

Wess Morgan began traveling and singing gospel music at a young age alongside his parents, Pastors Joesph & Yolanda Morgan and siblings Joey and Delana. In November 2007, Wess Morgan released his debut CD title “Look at Me Now” under his newly formed label Bowtie World Music. The contemporary Gospel music CD serves as a testament to the experience of transformation in Wess Morgan’s life. Once “Look at Me Now” was commercially released, the Christian based media industry began publicizing Wess Morgan’s remarkable success story via TV, radio and print media. Wess Morgan is the founder and director of the Wess Morgan Foundation, an organization whose focus is drug and alcohol prevention and recovery. Bowtie World Music has completed the production of its sophomore recording title “Under an Open Heaven” featuring Wess Morgan and the Celebration of Life Church Choir where Morgan serves as Senior Worship Leader and Associate Pastor. The “Praise & Worship” music CD features several guest recording artists singing songs written, co-written and co-produced by Pastor Wess Morgan.

Central South Distribution, Inc.’s mission is to nurture and cultivate God’s message through the growth of Christian music. CSD has been servicing the Gospel and Christian community for nearly four decades and takes pride in being the #1 Independent Gospel Distributor, and the World’s Largest Distributor of Gospel Music. They distribute Gospel Music to all of the top Gospel, CBA and Mainstream Accounts including, other distributors, chain stores and independent retailers.