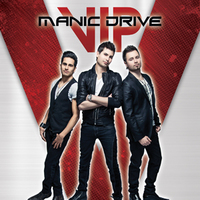 For fans of the Toronto-based MANIC DRIVE, it has been a long three-year wait since their acclaimed studio project, EPIC.  Since its inception, this award-winning trio has built a loyal international following, fostered by their infectious brand of power-pop and a genuine commitment to a relationship with their audience. As of earlier this week, Tuesday October 14, a new season begins.  Manic Drive made a conscious decision to step away from the label system and release their fifth studio album, VIP, as indie artists.

While the VIP album is available in most online outlets and brick-and-mortar stores, iTunes is not only launching the project at a special introductory price of $7.99, but is also offering the entire back catalog of the band for the low price of $5.99.  The iTunes campaign can be accessed here.

As a tribute to the album’s release and a thank you to their fans who supported the fully-funded Pledge Music campaign, the band has debuted the concept video for the title track “VIP” exclusively on their newly redesigned website –  www.ManicDrive.com.  Featuring Manwell from Group 1 Crew, the video is an entertaining look at red carpets, velvet ropes and roller rinks, while celebrating how God made each of us unique and for a special purpose.

Air 1 has been an early adopter of the “VIP” single, adding the song ahead of the formal add date.  This week, just in time for the album release, the song debuted at #28 on the Billboard Hot AC chart.

Two years ago, brothers Shawn and Michael Cavallo and longtime bandmate Anthony Moreino decided to take the wheel of their career, choosing the road of independent artists. By investing in their own recording studio, continuing a near-constant tour schedule, finding community with other like-minded artists and producers and focusing energy on their strong Maniac fan base, Manic Drive has been able to create VIP on their own terms.

To create the VIP project, Manic Drive tapped the production talents of Oh, Hush! (Cee Lo, Jamie Grace) and Nick Baumhardt (Stellar Kart, Britt Nicole).  To round out the album, the band enlisted vocal collaborations with Manwell (of Group 1 Crew) on the title track “VIP”, as well as Trevor McNevan from Thousand Foot Krutch on the song “Electric.”


Our review of VIP is coming very soon.