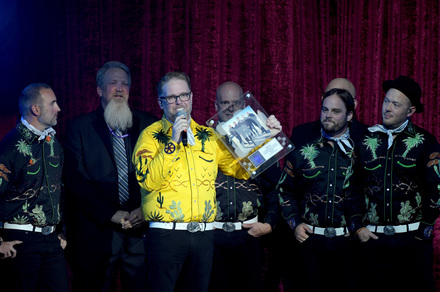 MercyMe lead-singer Bart Millard co-hosted the 45th Annual GMA Dove Awards with Lecrae last week, and even so, had no idea what was in store following the band’s lively performance of their No. 1 radio single “Greater.” As the multi-platinum, award-winning band wrapped, the band’s manager, Scott Brickell and Fair Trade Service’s President Jeff Moseley presented MercyMe with a plaque commemorating 2 million downloads of their worldwide hit “I Can Only Imagine,” followed by a standing ovation from the audience. “I Can Only Imagine” is the first single in the Christian genre to receive RIAA Double-Platinum Certification and also made history as the first to go Platinum. The GMA Dove Awards drew a record attendance at Lipscomb University’s Allen Arena, and the entire show will be broadcast exclusively on Trinity Broadcasting Network (TBN) on Sunday, October 12.

In addition to MercyMe taking home a win for Short Form Video of the Year with “Shake,” Millard shared his excitement about hosting the awards: “The entire night was really pretty awesome! I didn’t see the 2 million download thing coming at all. It was pretty surreal to be onstage with Lecrae as well – just unbelievable really, and overall a great night – I had a blast!”