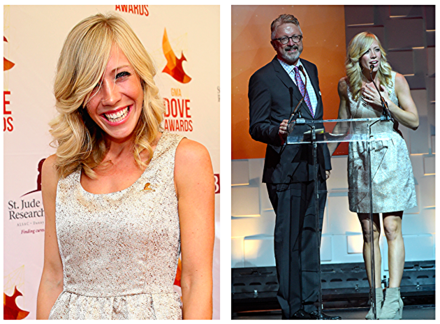 Singer, songwriter and storyteller Holcomb was named New Artist of the Year at last week’s Gospel Music Association (GMA) Dove Awards. Holcomb is one of only two independent artists that have won this award.

During her acceptance speech, Holcomb tearily shared with the audience, “I am so honored and really shocked actually. What good company to be in and what an honor. I’m so humbled. What…a privilege it is to get to sing and to speak, like so many of you, about how Jesus has shown up in the heights of our joy and in the depths of our suffering.” Thanking her family, friends and team from the stage, she quoted from Hosea 6:3, which is the inspiration to the title and theme of her album, As Sure As The Sun.

Ellie Holcomb was one of the most visible artists during the Dove Awards. Along with her win, she performed her single “Broken Beautiful” during the main show, and she was also nominated for best Pop/Contemporary Album of the Year for her debut solo project, As Sure As The Sun. Additionally, she joined her father, Brown Bannister, in presenting the Lifetime Achievement Award, which was given to Hillsong.

The GMA Dove Awards were held in Nashville, Tennessee at Lipscomb University’s Allen Arena. The show will air on the Trinity Broadcasting Network (TBN) on Sunday, October 12th. Check local listings for the broadcast time in your area.


Read our review of Ellie Holcomb’s As Sure As The Sun here.