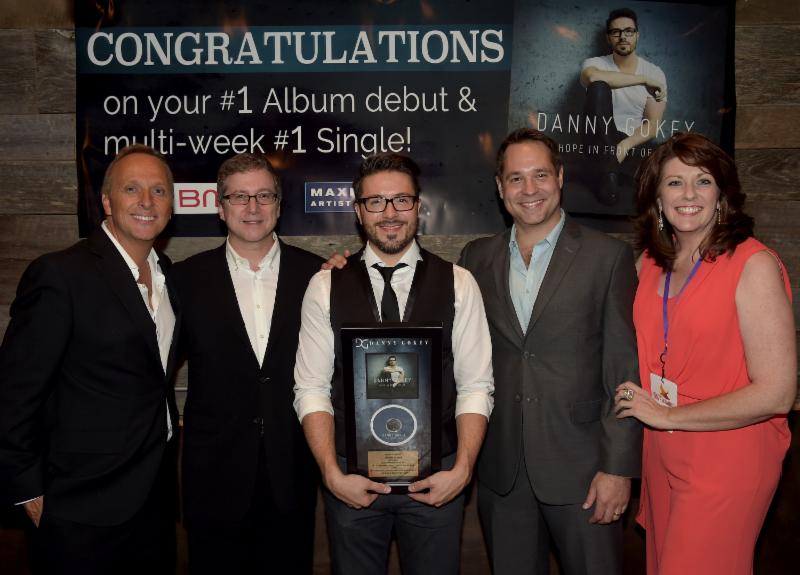 BMG Recording Artist Danny Gokey celebrated his chart-topping hit “Hope In Front of Me” at a surprise No. 1 bash following the Dove Awards. Gathering with family, friends and his team of industry leaders, Gokey was feted with speeches by BMG executives, industry VIPs and radio. To commemorate the event, he received a No. 1 plaque for his single, which spent four weeks on the top of the Christian radio chart, and for his album, which debuted at No. 1 on multiple Billboard Christian charts.

“This is an incredible surprise; to be surrounded by my team, family and friends and to receive this recognition, it’s full-circle,” Gokey elated. “It’s been a journey through writing and creating the music, hitting the road visiting radio stations across the country, and seeing the positive response of fans going to stores and iTunes to purchase and support this record. I am grateful for the success of the album and single, and can’t wait to see what is next.”

“Danny is one of the most honest representations of talent, strength, courage, generosity, and faith,” said Richard Blackstone, who runs the Artist Services division of BMG, North America. “This song is a brilliantly created jewel, the message of which is resonating with people around the world. This song touches upon a timeless message and thus it will be around for many years to come.”

“Hope In Front of Me” released in February of this year. In July, it landed at No. 16 on the chart. The track broke the top 10 at No. 6 three weeks later. After nearly 30 weeks on the chart, “Hope In Front of Me” made the remarkable journey to the No. 1 spot, where it remained for four weeks. “Hope in Front of Me” is penned by co-writing trio Gokey, Bernie Herms, and Brett James. Herms also produced the chart-topping track. The album debuted at the No. 1 spot on multiple Nielsen SoundScan Billboard Contemporary Christian music sales charts. The album is produced by Herms (Natalie Grant, Casting Crowns, Barbra Streisand, Andrea Bocelli), Keith Thomas (Amy Grant, Blake Shelton, Chris Mann, BeBe & CeCe Winans, Heather Headley), and Josh Crosby (Cher, Owl City, Mat Kearney.)