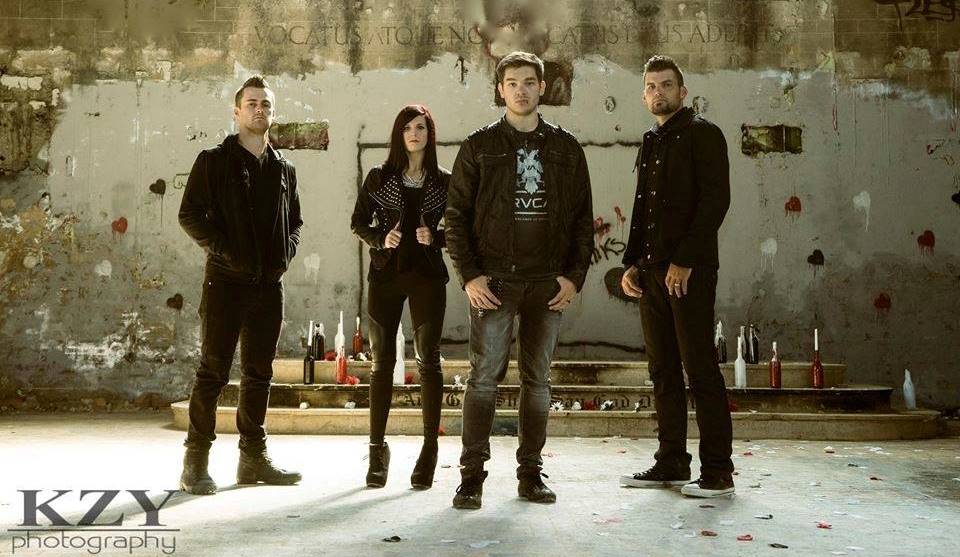 Hard rock band Scarlet White is back with their sophomore, and concept, album, The Inbetween. Scarlet White formed in 2008 with a focus on spreading the name of Christ and being men of integrity. Their name, based on Isaiah 1:18, is meant to remind their fans that though we are sinners, His grace forgives all who believe. Their first full-length album, Scarlet White, featured the hit song, “Running Through the Storm,” and the new album, The Inbetween features the already hit single “Wake of the King.” Let’s see what’s “in between” the covers of this album!

The first track, “The Inbetween,” is a short prologue that builds the sound of blindness, which gives way enough to hear some mellow instruments in the background. But once “Draggin’ Them Down” starts, you know this is a hard rock album. Their transitions from metal to mellow (and styles in between) throughout the song provide a good landscape for warning us that if we “don’t say what’s going on” and “don’t care what’s going on,” we are just dragging each other down.

Continuing the idea from the previous song, “Long Way” is about holding in his conflicts with others – fostering the feeling of forgottenness and hate from his peers – only to blow up and “end up a long way from here.” “By Your Throne” showcases his decision to stop lying to himself and to humble himself before God; to stand on his own – separate from the world – and follow God, trying to be like Him. The lyrics on this track are sung especially passionately.

The second “act” of the album, so to speak, starts with their current radio single, “Wake of the King.” With an aggressive sound, this song boasts our confidence in God, declaring that we follow only Him, as part of His unescapable force. A heavy-sounding, musically-flowing track, “War” shows his eagerness to fight. Instantly moving to a softer, almost acoustic, sound in “A Letter,” he admits to running away and being “too scared to breathe,” but praying to be brought back to God.

The third act of the album opens with harsh guitar riffs in “Fire,” a song which will remind many listeners of some of P.O.D.’s early work. The declaration of God’s impending wrath upon unbelievers – “incinerate the opposition” – is sung with a unique mix of vocals, from singing, to harmonized singing, and to screaming. “Bury Me” opposes the world’s advice to “find faith of my own” and to “let your soul hunger,” and that when we fight, the “Darkness will fear the Light.” Flipping to a less in-your-face sound, “I Am Yours” is a prayer; worship in that “I need You now,” and “I am Yours,” and petition in asking Him to “cure my agony, forget that part of me” and to “give me strength.”

Act four starts with the mellow-sounding-at-first “So Young,” which is an understanding of our physical death: “Why’d you have to leave so young?” but “I know you’re Home.” The final song, “Worthy,” which effectively follows the ‘hard rock choruses with musically mellow verses’ formula, speaks for itself: “You are not in this alone, and the battle has already been won, and you are worthy.”

The Inbetween is a concept album, with a passionately-sung variety of vocals, and several musical styles. The lyrics are relatable for anybody in the Christian walk, and every track is well-produced and passionately sung. Overall, I’d rate The Inbetween 8/10. Scarlet White are certainly a new band worth keeping a solid eye, and ear, on.