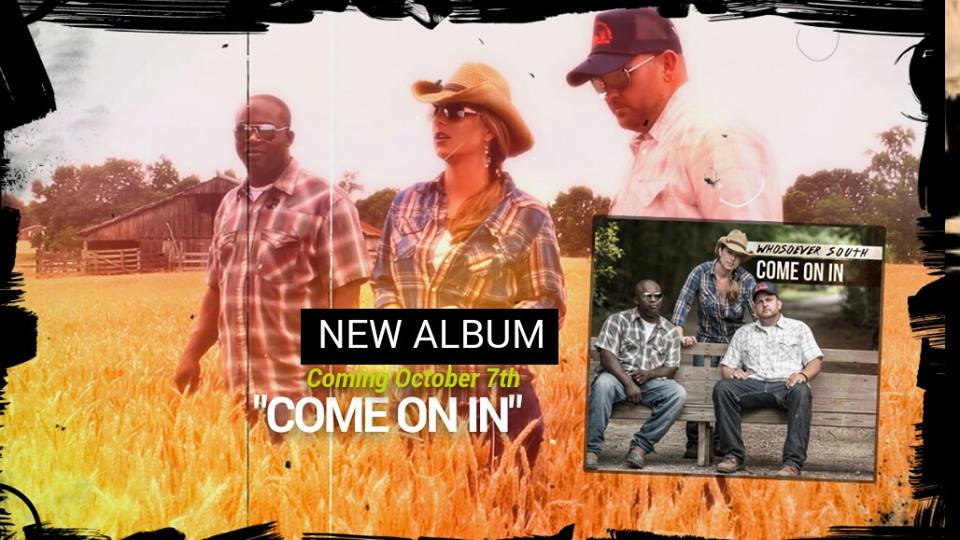 After 3 underground albums, Whosoever South is ready to explode onto the scene with Come On In. Honing their craft since 2008, the trio has created a sound they like to refer to as “Country Crunk.” The crew is a perfect example of the idea of the sum of all its parts. The Georgia based Whosoever South is comprised of married couple Rowdy and Sarah Eunice and their distinctive and unique to each other hip hop deliveries as well as Mike Mitchell and his soulful choruses. It is immediately evident that each member is equally valuable, in fact integral, to make Whosoever South the well oiled machine it is.

Harmonica, banjo, chanting and clapping help set the mood on the opening track “Come On In.” Mike quickly jumps in as he offers an invitation to Whosoever’s upbringing and lifestyle with his chorus “Won’t you come on in.” If you are from the country, or are at least familiar with it, “Come On In” paints such a vivid picture, you will surely be left feeling homesick. For those uninitiated, you will be left with a decidedly authentic depiction. Naturally, as is the case in all of Whosoever South’s music, glorification of God is on display proudly and prominently. As a rather effective complement to the album’s title track, there is a video released for “Come On In” that can be viewed below.

Several tracks found on Come On In remain heavily influenced by the Country lifestyle while ever so subtly introducing the hip hop sounds that may be more recognizable. These tracks are perhaps the best example of the “Country Crunk” sound that Whosoever South has pioneered. The first of these tracks is “Sounds Like Home.” Continuing on with the theme of introducing God’s Country to city folk, it marries the traditional country instrumentation with the bass and hi hats you may be more accustomed to. “Rise And Shine” and “Survive” also take advantage of the same surprisingly pleasing to the ear combination.

“Living Water” sheds the hip hop and features Rowdy and Sarah joining Mike in a somewhat (at times) bittersweet compendium of tales of various people being introduced to the wonders of God’s gift of everlasting life beyond this earth.

Joining “Living Water” in the “don’t listen without a box of tissues” department is “Crying Out” and “War Goin On.” It’s not too often that hip hop is found to address tear jerking themes, but Whosoever South travels down the road rather effectively on multiple occasions on Come on In. “Crying Out” is perhaps the most emotion inducing of the bunch. For the male listener, the “I have allergies, I’m not crying” excuse is particularly effective.

Stylistically, “Get Down” is the first of several tracks that seek to almost emphasize more traditional crunk, funk, techno and club styles of hip hop while not completely eschewing Whosoever’s trademark country sound. “Nothin To It,” “Down Here,” and the “Country Crunk Remix” share the idea of fusing their unique blend of hip hop with the more traditional club friendly beats and energy. “Nothin To It” is perhaps the most ‘fun’ track found on Come On In. Imagine combining double time rapping set to a musical backdrop of high speed line dancing instrumentation!

Often times when genre mashing styles are introduced by an artist/group or within a song, it can be difficult to show differentiation amongst tracks therefore leaving critics to complain that everything sounds the same. Whosoever South, however, has taken their various influences and created a sound that is equal parts authentic, unique and fresh. Come On In proves without a shadow of a doubt that there is plenty of room for exploration even while staying within the sub genre of “Country Crunk.” Most importantly, God is at the center of the music. Don’t be shy y’all Come On In! Just be warned, you may end up buying some flannel shirts, Wrangler jeans, a cowboy hat and a pickup truck with giant tires suited for mud riding by the time its all said and done.

Buy Come On In:
iTunes | Amazon