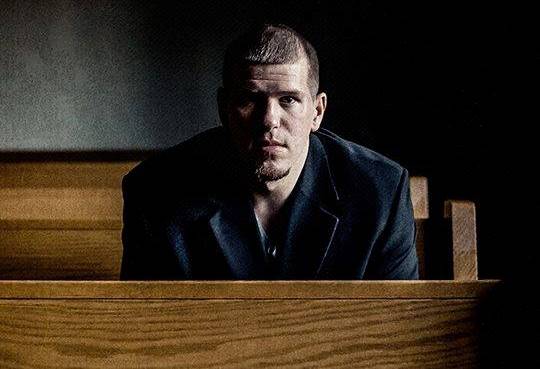 Hailing from Philadelphia, PA, Stephen Brindle is a busy man. Aside from creating music and running his label Gametime Recordings, Brindle is also an avid (and nationally ranked) power lifter. As if that is not enough, he manages to scrounge together an extra 50-60 hours a week for the University of Pennsylvania in the role of Strength and Conditioning coach.

His latest project, Battling Unbelief is packed full of introspection, admission of imperfection and humility in God’s presence. Not carrying that weight entirely on his own shoulders, he is joined by an impressive cast of features including: Selah the Corner, Bumps INF, Average Joe, Martay, Amber Anderson,ThaKidd Jopp, Datin and Timothy Brindle (yes, they are brothers).

Content wise, what is perhaps most impressive about Battling Unbelief is the clear understanding of the opportunity that creating music provides for the emcee also known as Believin Stephen. There is absolutely nothing wrong with using music that does nothing but entertain, so long as God’s name is not blasphemed in the process. Dope beats and sick delivery certainly have their place. Not everyone has the ability to combine said dope beats and sick delivery with biblical education. Every bar of Brindle’s, as well as his partners, is of purpose and meant to invoke introspection and focus on where life’s purpose derives from.

Battling Unbelief is full of tracks that take turns exposing the listener to tales of caution, pain, failure and loss. There is always a light at the end of the tunnel though, and the album continuously points the listener to Christ as the answer. Stephen Brindle very clearly has an appreciation for multiple genres of music as evidenced by the plethora of recognizable beats spanning classic rock, old school hip hop and even some hard rock themed influences found throughout.

On the opening track (save for the intro) “Don’t Be Afraid,” Believin Stephen hits the ground running. The beat is one of those magical beats that just makes you want to throw some weights around, or run up a hill. The cadence and content of the lyrics are equally motivational, pumping your ears with encouragement for hard times. Brindle’s delivery oozes confidence and clear evidence that he believes what he is spitting. For the fans of hard hitting tracks, “Help Us Believe” and “Voices” bring the same energy as “Don’t Be Afraid” while also managing to deliver the same lyrical depth of the aforementioned track.

At approximately the half way point is the particularly analytical and autobiographical “Cast My Cares.” With a much more stripped down level of production, the song places the lyrical content at the forefront. Often times, artists can be afraid to show their imperfections and weaknesses. “Cast My Cares” may not be your first choice for a workout track, or to show off the bass in your car stereo system. It is however, a welcome reassurance that the artist you are listening to is a self professed imperfect human who faces the same fears, challenges, and source of hope that you do.

“Cast My Cares” is joined by several introspective and emotion inducing tracks. “Picking Up The Pieces,” “Battle For Contentment,” “Battling Together,” “Endurance,” and “Mind Wars” all play as chapters in a faith based self help/guidance book. Believin Stephen is refreshingly transparent throughout Battling Unbelief, but is especially so in the above listed tracks.

Previously mentioned “Mind Wars” is a (and perhaps the most) standout track with Brindle and Datin having a back and forth discussion of the challenges of believing in a God that allows for pain and suffering, and at times seems to not answer one’s prayers. Datin is a perfectly placed feature on “Mind Wars” excelling at responding to Brindle’s voiced concerns that so many of us share or have shared at some stage in our lives. The concept of “Mind Wars” is phenomenal. Fortunately the execution is just as on point, with a beat that fits the theme like a glove, and ‘A game’ type of call and response from the two emcees.

“Battling Unbelief” is next in line after “Mind Wars.” For the diehard hip hop fan, the track brings a familiar beat to brothers Stephen and Timothy Brindle’s heavily biblically themed address of the history of belief and likewise lack there of at times, in God’s promises. Where “Mind Wars” wins the prize for most unique concept on the album, “Battling Unbelief” wins the “Shai Linne like” track that most directly and effectively recites verses from the bible award. Brindle pulls heavy influence from God’s word on several other tracks as well, including “Promised Land,” “God’s Promises,” and the “Battling Together” interlude.

If you are looking for pure unadulterated worship tracks, Believin Stephen has you covered on that front as well, with “Around the World” and “He Has Made Me Clean.”

Stephen Brindle has put a lot of effort into meticulously combining entertainment and education for those who know Christ, and an opportunity to be exposed to him for those who do not. Instead of hiding his flaws and own battles with frustration and doubts, Believin Stephen has created an open book of his life project that is full of high quality lyrics and equally high quality beats and production. This project is exploding at the seams with top flight features. This project is full of integrity in its delivery of what having God in your life does and does not mean. This project is entitled Battling Unbelief and this project belongs in your library.