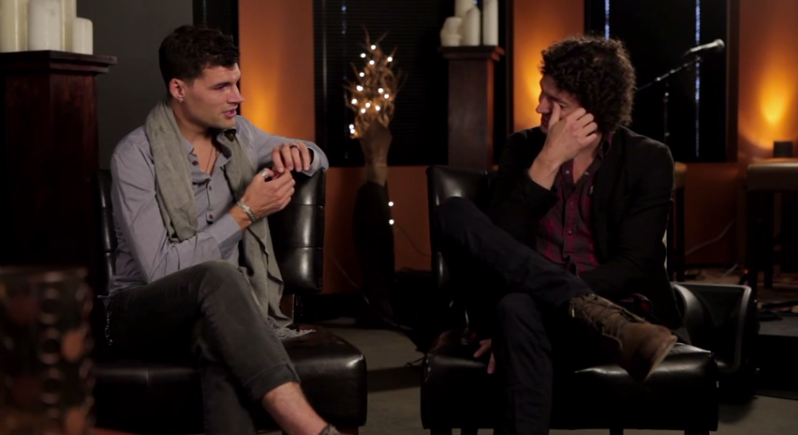 Following four GMA Dove Award nominations, three for the lead single and No. 1 song “Fix My Eyes” from the highly-anticipated, sophomore album RUN WILD. LIVE FREE. LOVE STRONG., for KING & COUNTRY continue their journey toward the Sept. 16 release of the album.  Yesterday, the song “To The Dreamers” from the album was premiered during NBC’s broadcast of the 66th Emmy Awards as part of the network’s “The Shows That Touch You” campaign to promote this fall’s NBC lineup. The promotion featuring the song will run for the next three weeks on the network.  To see and hear the video promotion, click here.

The duo, consisting of brothers Joel and Luke, is also pictured below playing new music and fan favorites like “The Proof Of Your Love” from Crave in front a capacity crowd of 45,000 people at Anaheim Angels Stadium during Pastor Greg Laurie’s SoCal Harvest Crusades event Aug. 16.

Next month, for KING & COUNTRY embarks on a major market, 40-city fall “YOU MATTER – THE TOUR” that launches Sept. 14 in Nashville (Franklin, TN).  The tour then continues into significant venues in cities like Los Angeles (Chino and Riverside, CA), Washington, D.C. (Woodbridge, VA), Pittsburgh, Indianapolis, San Diego, Las Vegas, Austin, Albuquerque and more before wrapping up in New York City Nov. 23.  Being sponsored by Compassion International, all “YOU MATTER – THE TOUR” dates, as well as tickets, are available now at www.forkingandcountry.com.

With RUN WILD. LIVE FREE. LOVE STRONG.,for KING & COUNTRY has created an album that lives up to the band’s name, a reflection of standing and fighting for something bigger than yourself, a mission statement that drove the duo from the first words written for this project until the last note was recorded.

Available for pre-order now, iTunes is offering three Instant Grat Track downloads, including “Fix My Eyes,” encouraging anthem “It’s Not Over Yet” and the newest single, “Without You (Feat. Courtney),” which hit No. 1 on the Christian & Gospel Top Songs iTunes® chart and is an inspiring, real life message of hope that features a beautiful duet with Luke’s wife Courtney.

Our review is being posted later today – don’t miss it!

About for KING & COUNTRY:
The duo was named “New Artist of the Year” at the 44th Annual Dove Awards and “Breakthrough Artist of the Year” at the first annual K-LOVE Fan Awards. Their critically acclaimed album, Crave, released in 2012, is the highest selling debut from a new artist in their genre that year. They made their late night debut performing their hit song “The Proof Of Your Love” on The Tonight Show with Jay Leno and the song was namediTunes’ Breakthrough Christian & Gospel Song of the Year. ET’s “The Insider” said for KING & COUNTRY “make music that speaks directly to your heart” and have been “gaining popularity in the alt-rock genre.” American Songwriter commented that “for KING & COUNTRY may just be Australia’s answer to Coldplay.” In 2012, they were named one of Billboard’s 17 acts to watch and were CCM’s best-selling new artist.

For more information and a complete listing of tour dates, please visit: www.forKINGandCOUNTRY.com, www.facebook.com/forkingandcountry and https://twitter.com/4kingandcountry.