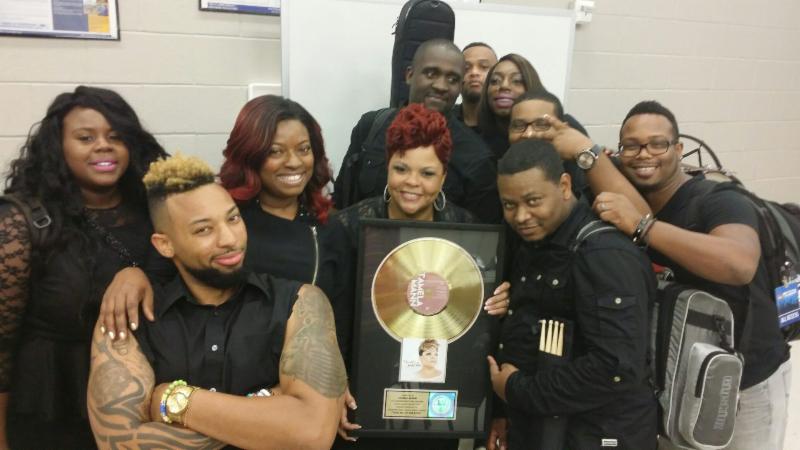 Grammy Award® Nominee Tamela Mann and Gospel Icon Kirk Franklin have a lot to celebrate. The “Take Me To The King” digital single, written and produced by Franklin and recorded and performed by Tamela, has been RIAA Certified Gold, having sold more than 500,000 digital copies. Tillymann Music Group label head and Tamela’s manager and husband, David Mann, presented Tamela with her RIAA Certified Gold plaque during their Comedy and Concert event on Friday, August 1 at the Victoria Fine Arts Center in Victoria, Texas.

“What an amazing surprise to be presented with my first RIAA Certified Gold plaque by my husband of 26 years,” said Tamela. “I thank God every day for my family, friends, music and the many blessings in my life. Kirk is a dear friend and an incredibly talented artist, writer and producer. I’m so grateful to him for penning such a powerful lyric and asking me to lend my voice to such an important message.”

“Take Me To The King” was also recently named one of the most performed songs on Gospel radio in 2013 during BMI’s 2014 Christian Music Awards held at BMI in Nashville, Tenn.

The song featured on Tamela’s No. 1 selling 2012 album ‘Best Days’ was released to Gospel radio. The track quickly climbed to No. 1 on the Gospel radio chart where it remained for more than 25 weeks. While Tamela has performed this song on numerous TV shows, including the BET Awards, Sunday Best, and the Stellar Awards, the song has found a special place in all her concerts as an inspiring high point of the powerhouse vocalist’s set.