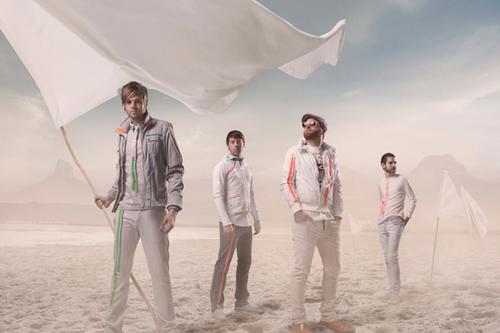 Nashville group, Satellites & Sirens reached a first for the group this week as their single, “Jump Start My Heart” debuted at #1 on the Christian Music Weekly chart.  The song which has been on the charts for over 22 weeks now, and 23 weeks on Billboard’s Hot AC / CHR chart peaking as high as #5, have given their debut album, One Noise, new found attention with their fan base.

“We are happy that Jump Start…is doing so well,” says frontman, Geoff Hunker. “We never thought we’d see it get here but we are so thankful that God has blessed us.“

Recently, the guys announced new tour dates and took time out to invite their fans to submit versions of the song by recording their own style of it on video. The top 10 most viewed videos will be entered to win 1 of 5 prizes that include anything from a pair of Tom shoes, live chats with the group, autograph copies of One Noise or even performing their version of the song live on stage with the guys. The team at DREAM Records and the guys in Satellites & Sirens will select the winners after the deadline to upload the videos on September 1st. For instructions on how to enter, to download the instrumental track, and/or download the chord chart, go to http://www.dreamrecords.org/contest.  Check out the video from Geoff and “Little” Dave welcoming everybody to the contest:

Check out their own version they did of “Jump Start My Heart” acoustic:

If you hadn’t had a chance to see the lyric video for the song here you go:

ABOUT SATELLITES & SIRENS:
Nashville, TN based, Satellites & Sirens are no where near to slowing down. In March 2014, they released a new album titled One Noise, a testament to their passion for innovation, love for God and worship. Their latest release perfectly blends their synth, rock, and pop influences into a 12 song album sure to please current fans and brand new fans alike.

ABOUT DREAM RECORDS:
DREAM was founded in 2008 to provide artists with a genuine approach to how real artist development should be done. By allowing for a partnership as a business model, Dream’s artists empower themselves to develop and carry out a real vision for their lives as they affect other people’s lives with their music and message. Incorporating social media, press, radio and touring it’s allowing it’s artists grow together as a family.