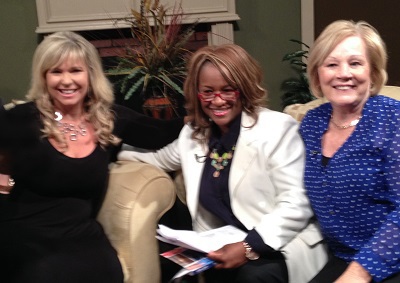 First-time author Sue Detweiler will today appear on an episode of WATC-TV57’s Friends & Neighbors, airing at 4:30 p.m. E.T.. Detweiler, who taped the show while in Atlanta recently for the 2014 International Christian Retail Show (ICRS), was interviewed by co-hosts Donna Ritchie and Ginger Sanders about her debut book, 9 Traits of a Life-Giving Mom: Replacing My Worst With God’s Best, from Morgan James Faith, an imprint of Morgan James Publishing.

“I loved taping the Friends & Neighbors broadcast,” Detweiler says. “As imperfect moms, the hosts and I encouraged each other. We know there are no perfect families, but we have a perfect Heavenly Father who loves each of us and guides us to be life-giving parents. I am excited about this message being received by moms of all ages.” 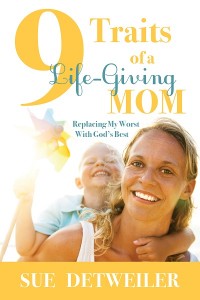 Each chapter of 9 Traits Of A Life-Giving Mom begins with one of the nine traits of a life-giving mom, which correspond to the nine fruits of the Spirit as outlined in Galatians 5, and concludes with an intimate prayer to God asking for help and guidance. Detweiler utilizes the concept of opposites to make her point: His love replaces our anger; His joy replaces our sadness; His goodness replaces our manipulation.

The book also incorporates a study guide intended for individual or group study.

Morgan James Publishing has been named to Publisher’s Weekly’s list of fast-growing independent publishers three times. According to PW’s Lynn Andriani and Jim Milliot, “Morgan James makes an extraordinary effort to help its authors to grow their own business.”

About Sue Detweiler:
Sue Detweiler is a mother of six, author, speaker and Bible teacher. Her Healing Rain radio feature is heard on many Christian radio stations across the country. Her internet radio program, Inspiring Women, features interviews with authors such as New York Times best-seller Dan Miller (48 Days To The Work You Love).

As a faithful steward, Detweiler has developed her God-given talent to communicate and articulate profound truths in simple and relatable ways. Her experience in marriage, motherhood and ministry exemplifies the life of a woman who has embraced her call and is fully alive to all that God has created her to be. Her debut book, 9 Traits of a Life-Giving Mom, released May 8, just in time for Mother’s Day 2014, with the print version following in October.

About WATC-TV57:
WATC TV 57 in Atanta is the home of many original series including The Bobby Hurd Show, Friends and Neighbors, The Gravedigger Show, Seniors Today, Gospel Touch, Babbie’s House, and the station’s flagship program, Atlanta Live. The station has been honored with numerous Angel and Telly Awards for its productions and received its first EMMY Award in 2010. For more information, visit watc.tv.