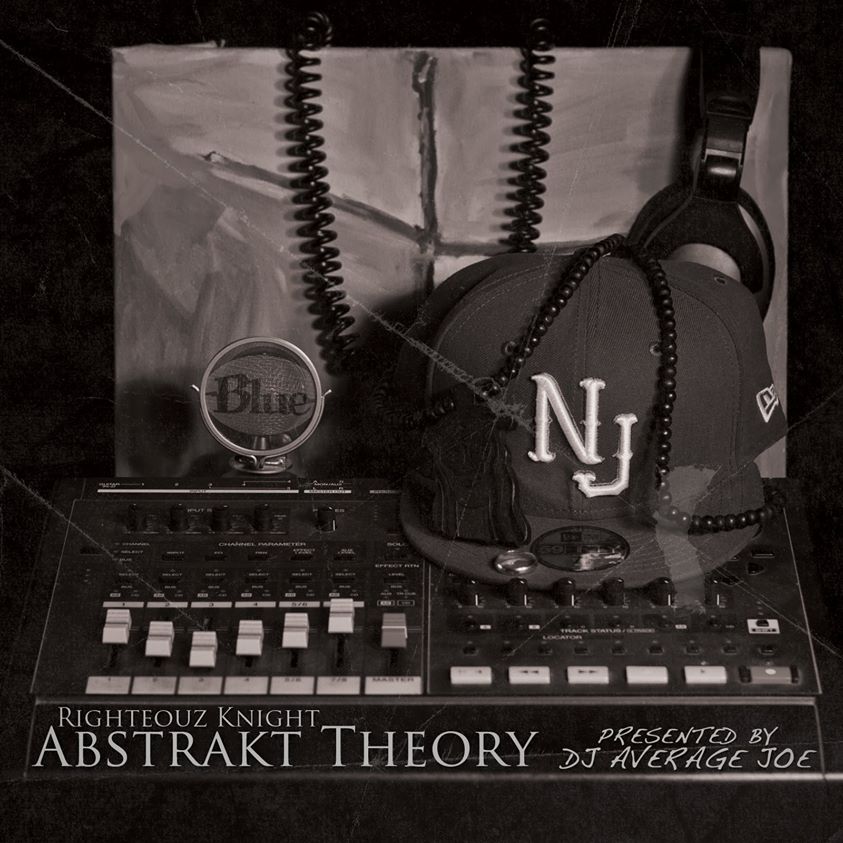 New Jersey based Righteouz Knight has just released his follow up to Spiritual Warfare and the Prequel Mixtapes (Volumes 1 and 2) entitled Abstrakt Theory. The talented emcee, producer and graphic designer has been steadily and meticulously growing his label Holy Core Records.  Paralleling the business side of things, Righteouz Knight has shown impressive musical growth and depth in his offerings since 2004 when he gave his life to the Lord.

The underground ambassador has been tirelessly promoting the release of the feature length album. After the releases of each of the three videos and two free to download tracks, the anticipation for Abstrakt Theory has been growing with a fury rivaling that of new Apple device rumors. The great thing about Righteouz Knight’s release is that you don’t have to wait in line for it, and there is much less opportunity for technical glitches.

The true genius of the chosen format of Abstrakt Theory is that the album has been released in a mixtape format (hosted by DJ Average Joe). Even those with the most rudimentary knowledge of the hip hop scene should be plenty familiar with what DJ Average Joe brings to the table. The mixtape format works so well with this album because each and every song truly fits the mold of Righteouz Knights’ vision for Abstrakt Theory. This is not a loosely connected album of divisive tracks with one chosen at random to also be the name of the album.

Abstrakt Theory is one of those rare albums that has a unique blend of cohesiveness still with enough variety to prevent fatigue from hearing the same sound over and over. RK provides the blueprint on “Below Sea Level,” stating “…chops, drums, snares, bass, the gospel. That’s the recipe.” The beats all hit hard, the production is on point and the bars delivered by Righteouz Knight and company are delivered with the passion and furor expected from the underground hip hop scene. Most importantly, the glorification of God in no way shape or form feels like it is taking a back seat to the effort put forth in the other aspects of Abstrakt Theory.

The third track, “Demolition Derby” is the premier track in which Righteouz Knight utilizes the bevy of talent enlisted on Abstrakt Theory. Thanks to the assistance of Swinn Da Example and the Freestyle Fam, the idea of staking their claim to superiority because of, rather than in spite of, the presence of God’s influence in the music is established. With lines such as “…my ‘B’ material throw away crap, you aint even half that” and “I preach the gospel, so when I rap I’m always better than you” are just two examples of bars found throughout Abstrakt Theory that have Righteouz Knight and this impressive collection of faith based artists drawing a line in the sand. These artists are resolutely establishing a level of confidence in their craft and are rightfully seeking their respective places at the top of the heap of un-categorized hip hop. The days of accepting the little section in the corner so graciously provided by the “secular” industry for emcees that dare discuss their faith in their music appears to be a thing of the past.

There has long been a debate over whether a feature on a track represents an artists’ comfort in sharing his “shine” with another emcee vs. one’s inability to “carry” a track on his own. Throughout Abstrakt Theory, Righteouz Knight proves without a shadow of a doubt that he can fly solo with as many bars as he chooses to. He rather selflessly has no insecurities however in sharing the mic with his brothers to drive home the respective messages. The features on the album are a mind boggling collection of fellow underground artists at various stages of their careers from the “bEast Coast” including Swinn Da Example, Freestyle Fam, Disciple(DI), Datin, Reveal, ThaKidd Jopp, Anonymous XI, Chosyn Disyple, Rkitect, Evangel and the Apologist. If you have been working to build your hip hop library, you could do a lot worse than using this group as the core of your collection.

One track on Abstrakt Theory of particular noteworthiness is “Scrabble Battle.”  Righteouz Knight, Chozyn Disyple and Swinn Da Example take turns delivering bars with literally nothing but words that all start with the same letter (including the avoidance of coordinating conjunctions). Even more impressive, is that the verses are cohesive thoughts vs. simply spitting out a bunch of “s” “p” or “r” words, respectively. Perhaps this is one of those feats that you have to attempt to fully appreciate the difficulty of such, so try it for yourself.

With no fillers or throw-away features to be found, Abstrakt Theory is a magnificently conceptualized and produced delivery of underground east coast hip hop that should be a wake up call to the genre, especially those artists on that half of the Mississippi. Whereas “Hip Hop Shop” has Righteouz Knight taking a journey through a previous era who influenced him throughout his musical growth, Abstrakt Theory will undoubtedly be among this era’s “I remember when I first heard…” collection of albums.