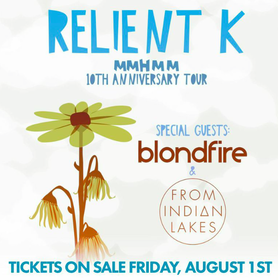 Relient K announces the special “Mmhmm 10th Anniversary Tour” this fall with special guests Blondefire and From Indian Lakes. This tour will begin on October 30 in Louisville, KY and run through December 12 in Nashville, TN. Tickets will go on sale this Friday, August 1st through Ticketmaster.

Ten years ago Relient K released their third LP, Mmhmm, debuting at No. 15 on the Billboard 200 chart and later went on to receive RIAA Gold Certification, one of their three Gold albums. This album features two Top 40 hits including “Be My Escape,” which the band performed on The Tonight Show and Jimmy Kimmel Live!.

Relient K has been making the real thing since 1997, when Matt Thiessen and Matt Hoopes formed the band in high school. In the 15+ years since, they’ve released six full-length albums, five EPs and a Christmas record. They have toured the globe, and racked up several hit singles, a GRAMMY-nomination, two Dove Awards and performances on The Tonight Show with Jay Leno, Late Night with Conan O’ Brien and Jimmy Kimmel Live. The Los Angeles Times has praised Relient K for “its smart blend of punk pop and power pop, weaving together influences as diverse as the Beach Boys, Blink-182 and Fountains of Wayne” while Spin noted, “Few bands play punk-influenced modern rock as proficiently.”

Last summer, Relient K released their first studio album in four years titled Collapsible Lung (Mono Vs. Stereo). The band celebrated another Billboard 200 debut with their seventh LP project. The digital only release debuted in the Top 20 on the chart. This was the first time the GRAMMY®-nominated band has released a studio project in digital form only, and the album also debuted at No. 1 on the iTunes overall album chart.