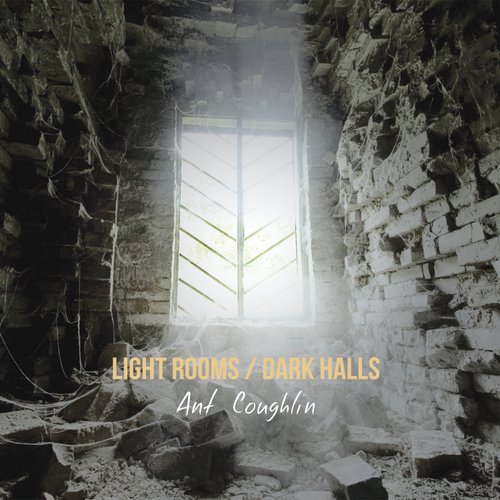 Perhaps a more appropriate way to describe Philadelphia’s Ant Coughlin than simply a “hip hop artist” would be that of story teller. With the lyrical prowess found throughout, it will surprise few that Ant counts Pastor and teacher among his many titles. This is the type of album that will find most listeners playing each track two or three times before moving on to the next. There will be no “If there was a point to that last track, I sure missed it” complaints to be found here.

Ant Coughlin has an uncanny ability to leave the hip hop fan sitting on the edge of ones’ seat waiting to hear how each particular story plays out. There is absolutely nothing wrong with hip hop music that leans more towards dance inducing and bass thumping with a Godly message packed in. Light Rooms/Dark Halls is simply like comparing a documentary to an action film; there is certainly room for both, and a true fan of the medium will appreciate each, provided the quality is there.

The musical backdrops of the tracks parallel Coughlin’s slick laid back delivery. Wes Pendleton and Kritikul add equal quality production to their respective tracks. Where as some hip hop albums will invoke one’s desire to cruise in the drop top sharing the music with everyone in earshot, Light Rooms/Dark Halls is more likely to create the urge to walk the block (or if you were really in a hurry, take a skateboard) with the noise canceling earphones (and accompanying daydreaming ensuing thereafter).

“Technicolor” sets the listener up well for what is to come. The pace of Coughlin’s story telling along with the TV drama like musical backdrop will likely introduce the listener into a strange sense of calm. The calm will seem strange only in that it will be mirrored with concurrent fervent attention to the details of what is being discussed. Ant is refreshingly open about his own walk from “pre” to “post” life with Christ on the introductory track.

Coughlin uses “All My Life” to display a more spoken word type of delivery. The soulful musical accompaniment will give you the sudden urge to head to the nearest coffee house/poetry reading while listening to a largely autobiographical tale of a battle with addiction.

“The Amnesiac’s Memoir (Dark Halls)” is an eerie sort of tale of one who feels overwhelmed with their shortcomings and thereby considering ending things. It is probably a good thing the track is only two minutes and ten seconds long, because with Coughlin’s ability to make the listener “see” what they are listening to, it is almost too depressing.

Tragic Hero lends his talents to the fourth track, “Thru the Floor.” The piano riff and hi hat create a jazzy feel to support the tale of the battle of reconciling with one’s desire to live a more “perfect” life vs. reveling in the joy that is knowledge of God’s grace.

On “Where Art Thou,” Coughlin takes the opportunity to make the listener thankful for the dictionary app on their smart phone, or wish they had one if they don’t. The theme of the professorial track is a tale of one struggling to learn of God’s love within the confines of a broken home.

Ella Curcuruto joins Ant Coughlin on the last track, “The Love That Finds Me.” Ant utilizes the last track to essentially thank God for being in his life, especially through tragic times. At one point pontificating, “… a broken heart relief, a sun shine to show me His mercy keeps on going like music on repeat.” Much like “The Amnesiac’s Memoir,” “The Love That Finds Me” is almost too difficult a listen, until one takes the theme of the track as it is intended, and revels in the comfort that our Savior offers us.

Fans of Propaganda, James Gardin, Shyne On Me, Soul Williams and Beautiful Eulogy will find Light Rooms/Dark Halls a welcome addition to the catalog. For those still on the other side of the hip hop scene, those more familiar with the likes of Mos Def, Talib Kweli, Lupe Fiasco etc. will find Light Rooms/Dark Halls quite familiar, and just as welcoming.

Light Rooms/Dark Halls is strongly recommended if for no other reason, than the artist’s willingness to lay his life on the table for others to learn from. Luckily for us all, the tell-all is married with quality production and well conceived story telling.