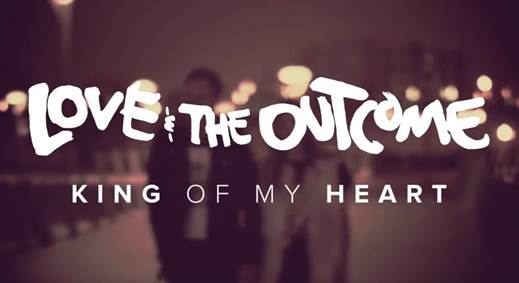 Love & The Outcome have released a brand new music video for their top 10 single, “King Of My Heart.” The high-energy new video features husband and wife duo, vocalist Jodi King and bass player/vocalist Chris Rademaker, performing the fan favorite live at the WinterJam Spectacular earlier this year. Playing in nearly 60 cities, WinterJam has featured many of the top names in Christian music and outpaced any other tour’s attendance for the past three years (according to Pollstar, 1st Qtr.).

Coming off the heat from their Top 5 hit and Christian ASCAP Award-winning debut, “He Is With Us,” their follow-up single “King Of My Heart,” a part of the duo’s self-titled debut, Love & The Outcome, is continuing to see strong support at radio jumping 5 spots this week to #22 on the AC Audience Chart and landing inside the Top 20 at Christian AC-Indicator and Top 10 at Soft AC.

“We wanted something to get the crowd on their feet and involved. ‘King of My Heart’ is perfect for that. The first line of the song is, ‘I’m in a war.’ It’s the battle between the flesh and the spirit, and we acknowledge in the chorus that Jesus controls our hearts,” Chris says regarding the song. “It’s a theme that’s found throughout the record.”

Love & The Outcome will join Building 429 in the direct support slot on the We Won’t Be Shaken Tour, beginning September 10 and concluding on November 16. The band will finish out their busy summer festival season with prominent slots at Rock the Desert, Kingdom Bound, and Universal Studio’s Rock the Universe.