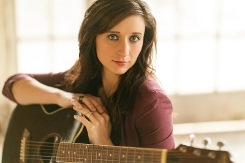 “Born To Run,” the new single from singer/songwriter Eva Kroon Pike’s current CD, Love Is All About You, was released to Christian radio yesterday. The song, written by Pike and veteran Christian hit songwriter Don Koch, is being serviced to Christian AC and Soft AC/INSPO-formatted stations.

The new single was inspired, in part, by Pike’s husband, Jonny. “Running took on a new meaning when my husband of almost 10 years decided to ‘get healthier’ and started running for weight loss,” Pike says. “A year later and almost 90 pounds lighter, Jonny reached his physical goal of getting fit. I immediately thought of how we need to spiritually run the race for Christ, with endurance, towards the ultimate goal, heaven. My hope for ‘Born To Run’ is that it will encourage others to get physically and spiritually ‘fit’ for God.”

Pike co-wrote the song with her producer, Koch, who has written more than 35 No. 1 songs during his career. He is a multiple Dove Award winner, including winning a Dove Award for Song of the Year in 1994 for “In Christ Alone.” Koch’s songs have been recorded by the likes of Avalon, Donny Osmond, Michael Crawford, Brian Littrell (Backstreet Boys), and Phillips, Craig and Dean.

The single, the second from the CD, is being serviced to Christian radio by A-Sides Radio Promotion. “I have been a fan of Eva Kroon Pike since her Grace That Chose Me album release back in 2010 and I’m ecstatic about working with her on her new radio single, ‘Born To Run,'” says Jeff McLaughlin, president of A-Sides Radio Promotion.

For more information about Love Is All About You and Pike, visit evakroonpike.com. To contact McLaughlin and A-Sides Radio Promotion, email .

About Eva Kroon Pike:
“Music is my passion,” says Eva Kroon Pike, who has been singing since age 3 and also plays the flute, guitar and keyboard. During her career, Pike has performed in front of thousands of people and has shared the stage with the likes of Anne Graham Lotz, Mark Harris, Babbie Mason and Third Day. Pike’s ministry, she says, is about “spreading the Gospel, one song at a time.” In her testimony, Pike shares her confidence that God has a plan for her life and that He chose, through her adoption as an infant, a very special family for her to grow up in to learn life’s lessons. Her ministry is to point people to her loving Father who sent His Son to die so that everyone who believes in Him will live eternally. Pike states in her song, “Grace That Chose Me,” which focuses on the theme of adoption, “So, if I’m anything close to what I’m meant to be, I owe it to the hands of Grace that chose me.”

Pike’s current EP, Love Is All About You, produced by six-time Dove Award winning producer and songwriter Don Koch (producer for Avalon, 4HIM, and many others; songwriter credits include classics “In Christ Alone,” “Adonai” and “Mercy Said No”), was released in 2013. It is the singer/songwriter’s fourth recording project. Her current single is “Not Miss A Thing.”

Pike’s current video, “Grace That Chose Me,” is airing at UP TV (formerly Gospel Music Channel) and has been featured at various events, including the Florida Baptist Convention. Pike, who has experienced firsthand the blessings of being adopted into a loving Christian home, is an outspoken advocate for adoption. She has partnered with the Florida Baptist Children’s Home, a Christ-centered organization that provides services for abused, neglected, and orphaned children, where she helps to promote the organization’s adoption and other ministry services to hurting children and families.