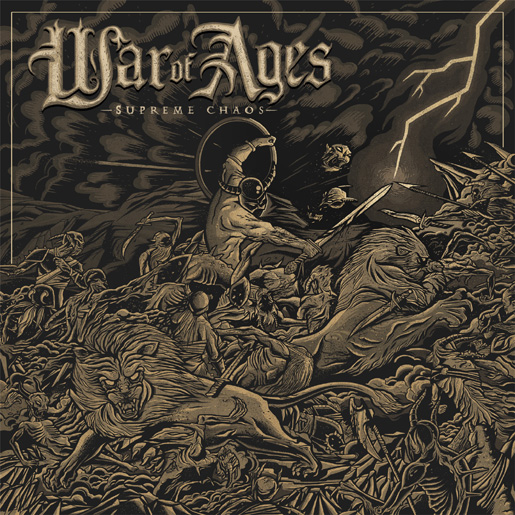 War of Ages Bring The “Supreme Chaos” on New Album

Christian metalcore giants War of Ages have been around for some time now, having released six full-length records and one EP since forming in the summer of 2002. Now the Erie-based group is back with full-length number seven, Supreme Chaos, which releases on long-time label Facedown Records this coming Tuesday. Supreme Chaos is a solid effort from the group, and perhaps their best yet.

“From Ashes” kicks off the album on a high note. The crushing instrumentation makes a striking contrast with the soaring chorus and Leroy Hamp’s singing. The track may be extremely heavy, but for metal it’s absolutely beautiful, and at times draws a parallel to melodic death metal. “Lost in Apathy” is a relentless metalcore song, but Hamp’s distinct vocal delivery is what gives it a unique twist. The pounding riff makes “Lost in Apathy” a guaranteed foot-stomper. “Doomsday” is not nearly as amazing as the previous two tracks, but it’s still solid nonetheless and the powerful chorus is really what pushes “Doomsday” over the top. While “Chaos Theory” turns things up a few notches in terms of aggression, the chorus remains the aspect of the song that stands out the most, with lyrics like, “We won’t believe you are hopeless / Praying for you with tongues of fire / Look at me when I tell you / You were loved at your first breath.” “Lionheart” is another guitar-driven track with anthem-like tendencies, including the outro, where Hamp screams “we are the chosen.”

“Lionheart” is followed by “On Broken Wings,” a song which has more powerful melodies and heavy undertones, but this time around errs more on the side of the melodies. “Amber Alert” is one of the strongest songs on the entire record, and kills it with the partly rapped chorus and a searing guitar solo in the bridge. It seems like it’d be hard to top “Amber Alert,” yet somehow “Renegade” does just that. What appears to be a mostly brutal track is complemented quite well with another melodic chorus. The gang vocals in the chorus also add to its charm, making it the strongest yet. “Ecstacy” keeps the melody going, and the bridge is really what sets it apart from the rest, before “Still Small Voice” closes out the album just as strongly as it started, with the guitars being at the strongest they’ve ever been.

There are several songs on Supreme Chaos that stand out, but the album as a whole is just as great. War of Ages has once again crafted a solid release, and this time around the group has added in quite a bit more melody to go along with their brand of metalcore. Any fans of the band’s previous releases will undoubtedly enjoy Supreme Chaos, perhaps even more so.