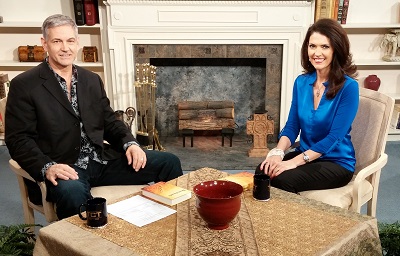 Deborah Buckingham To Appear As Guest On ‘TCT Alive’ On Sunday

Bible teacher and author Deborah Buckingham, whose debut book, Nourishments: Food For The Soul–A Daily Devotional, was released digitally April 8, will appear as a guest on the national broadcast of TCT Alive, airing at 3:30 p.m. E.T. Sunday.

“What great joy it was to share Nourishments with the incredible crew at TCT in gorgeous North Carolina,” Buckingham says. “I felt as though I was visiting family!”

Buckingham taped Sunday’s episode of TCT Alive, with host Pastor Rick Brooks, at the Greensboro, N.C., TCT studios during her recent media tour that took the author through 26 states in 60 days.

For a list of local affiliates or to watch TCT Alive live online, visit tct.tv/watch-live.

Founded in 1977 by Drs. Garth and Tina Coonce with one Christian television station in Cincinnati, TCT now is a worldwide network of broadcast stations reaching more than 60 million homes.

Nourishments was born out of Buckingham’s time as a stay-at-home mom while her husband, Greg, was building their successful family business. Desiring to remind her children of her love in the middle of their school days, while at the same time planting Scripture into their hearts during their youth, Deborah Buckingham formed a habit of tucking encouraging notes into the lunches of her school-age children.

“The seeds for Nourishments were actually planted many years ago when my kids were in school,” Buckingham says. “I used to write little ‘nourishments’ on index cards and pop them in their lunch bag. The ‘nourishments’ included a Bible verse personalized for them. Sometimes the index card got thrown away along with the apple without being read, but many other times they would share with me later in the evening how the ‘nourishment’ spoke to them. In high school, my son would often tell me his friends would ask to hear the ‘nourishment’ of the day around the lunch table.”
“Even as adults, we all need the nourishment of Scripture on a daily basis,” says Buckingham. “That’s what this book is all about.”
The book has received rave reviews from industry insiders such as Paul Eshleman, vice president, Campus Crusade for Christ, who says “Deborah Buckingham helps us to uncover God’s love and heart for us in the nuggets of Nourishments she provides in this daily devotional book. Her insightful questions in the devotional help us to answer personally whether we are trusting in God’s marvelous promises.”

About Deborah Buckingham:
Deborah Buckingham has been a Bible study teacher for the past 15 years. She has taught everything from small groups of women in her home to large classes with hundreds of attendees. Her teaching journey began in Southern California and has expanded to teaching women in Jackson Hole, Wy. She also has taught at women’s retreats including an international gathering of women in Barcelona, Spain. Buckingham recently joined her husband as part of a teaching team to Myanmar pastors and Bible school students.

Although a country girl at heart–Deborah grew up in a small town in Ohio–she loves California where she and her husband Greg moved on their second anniversary and raised their son and daughter until relocating to Wyoming. Buckingham continues to speak at her California church, while also serving as a member of the teaching team at her church in Jackson Hole. Greg Buckingham has participated in numerous mission trips, including opening a shelter for abused women and children, helping rebuild in Louisiana following Hurricane Katrina, and working with Finishing The Task, a group that focuses on unreached people groups around the world.

For more information about Buckingham and Nourishments, visit nourishments.org.