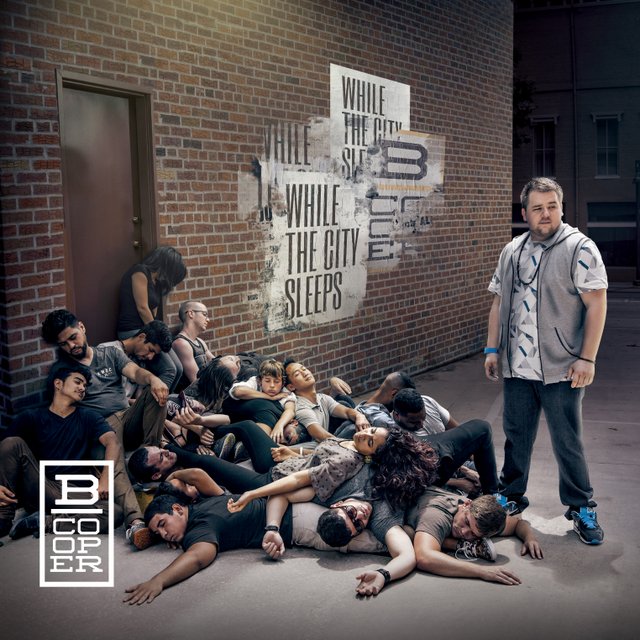 Alabama has something to boast about this week, with the release of B. Cooper’s newest project, While the City Sleeps. Literally jam-packed, this album is sure to be in your rotation for months to come. With his unique storytelling skills, B. Cooper has soulfully created an album worthy of being called “A Work of Art.”

The beats are just as amazing as the lyrics, with smoking hot productions from Dirty Rice, SykSense, and Tone Jones. Each one made their mark on this project, resulting in a combination of flavors that keep your head bobbing and your speakers rocking!

From the first track, “Middle of Nowhere,” B. Cooper pulls us into the thoughts of a wandering and lost Christian, finally looking up to realize just how far they have strayed. He goes on with a brutally honest fine tooth comb, recalling the things that led up to him being so distant from Christ, and taking time to acknowledge that he knows God is the way out. He delivers the track in such a way that makes us all check ourselves, and possibly have to recover from a harsh truth not yet realized about our own walks with Christ.

From there, the album gets more and more intense, dealing with genuine, and sometimes painful, emotions. On “Let Go,” B. Cooper pours his heart out about having to finally let go of a relationship that has turned out to be both draining and distracting, taking his focus off of his walk and the dreams he has, but neither can see through the love they have for each other. On “1 Love,” he expresses the need that we all have for at least one unconditional love in our lives, as he spits out a story of a girl who has lost her way.

The rest of the album is filled with hit after hit, with a few that scream for the repeat button! The single “1994” is definitely one you will want to hear over and over again, with the bass leading you into a head bobbing trance as Cooper acknowledges God for bringing him through the rough parts of his life and restates that his faith regarding his future is still in the Father.

“Nightmare” is another one that will keep you bobbing to the beat, while Cooper goes into how he needed nightmares to make his dreams real. “Better Days” is a very original track, from the way he rides the beat like a roller coaster with velvet wheels, to the way he tosses all the past into one category, claiming that better days are in store for the future. “There You Are” then acknowledges that no matter where we end up because of our choices, we are right in God’s reach, saying “It don’t matter where we are, there you are.”

The final, and album title track, “While the City Sleeps” is the result of B. Cooper getting his confidence back and getting back on path to achieve his dreams. He gives out his warning to those sleeping, while he is constantly working towards his goals, saying “sleep on, while I put on, till I’m gone.”

While The City Sleeps is the perfect mix of melodies, passion, and encouragement. Not only will this project provide you with hours of both enjoyment and cause for personal reflection, it will leave you wanting more and ready for what B.Cooper does in the future, a sign of a good album. While The City Sleeps released July 15th so make sure you don’t sleep on this album and pick it up as soon as possible.