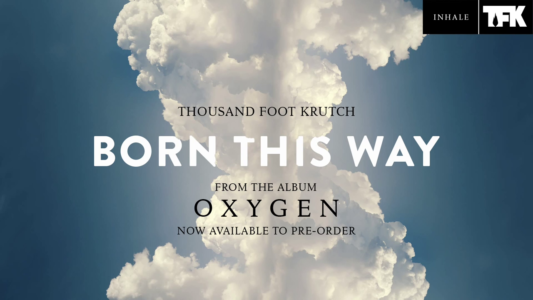 Today, modern rock favorites Thousand Foot Krutch launches its debut radio single, “Born This Way,” from the band’s first new studio album in over two years, OXYGEN:INHALE.  Premiering on Loudwire.com today at http://loudwire.com/thousand-foot-krutch-born-this-way-exclusive-song-premiere, the single goes for radio adds July 22 as the album is set to release independently worldwide Aug. 26 on TFK Music and with marketing, sales and distribution through Fuel Music.

Following five Active Rock hits from its No. 1 selling Billboard Hard Rock album, The End Is Where We Begin (2012), TFK frontman Trevor McNevan says the new single is about being comfortable in your own skin. “We were made to be who we are, and every one of us is unique,”says McNevan. “We’re wired the way we are for a reason. We were all created equal, and this song is an anthem for everyone who’s tired of being someone they’re not, or has to dumb down who they are for someone else.  Be yourself, you’re the best version of you.”

With the album being produced by McNevan and longtime collaborator Aaron Sprinkle (One Republic, Anberlin, Pedro the Lion, The Almost), TFK is once again engaging the “TFK Army,” fans of the band that they prefer to call their “friends and family,” for a goal-driven PledgeMusic campaign.

For the release of OXYGEN:INHALE, the band is asking its fans to help them through PledgeMusic to take its radio, retail, tour, video and media promotions for the album to the next level internationally.  The PledgeMusic campaign, which continues through the release of the album, is also a place for fans to pre-order the album and receive exclusives from the band that are not available anywhere else, including audio and video downloads, special incentives for all PledgeMusic backers after reaching target levels, and much more.  Asking for just one dollar to fully fund the campaign, the band received the first dollar from hardDrive’s Lou Brutus and Roxy Myzal and already has over 3,200 pledges for support at http://www.pledgemusic.com/projects/tfk.

Recently releasing their new OXYGEN:INHALE cover artwork on Facebook and Twitter, Thousand Foot Krutch have also reached a significant milestone on their Facebook page last month, surpassing one million likes for the first time. “Thank you SO MUCH for your incredible support over the years!” exclaims TFK band members on Facebook collectively after reaching the milestone. “You, THE TFK ARMY, never let us down, never fail to surprise us, and never fail to make us feel incredibly blessed – we have the opportunity to create music and share it with you because of your amazing support.”

With upcoming featured performances and headlining positions on the summer festival circuit, the Ontario, Canada-bred TFK has been a continuously escalating highlight reel since their formation in 1997.  Receiving over 2,000, 5-star average customer reviews on iTunes® alone for its 2012 independently released, SiriusXM Satellite Radio Octane-nominated “Epic Album of the Year,”The End Is Where We Begin, the album went on to become the band’s biggest ever selling mainstream album and spark five Active Rock radio hits (“Let The Sparks Fly,” “War of Change,” “Light Up The Sky,” “Courtesy Call,” “Fly on the Wall”), as well as two No. 1’s at Christian radio (“War of Change,” “Light Up The Sky”).  With best-selling albums, additional Active Rock radio hits “Fire It Up,” “Move” and “Phenomenon,” plus a slew of soundtrack slots, the group has literally infiltrated every facet of pop culture.  They continue to receive ongoing ESPN appearances, as well as various NASCAR, MLB, NHL, WWE, NCAA and NFL airings (including the 2010 Super Bowl), along with the “GI Joe” movie trailer, WGN-TV’s “Smallville” and EA Sports’ NHL 2010 and 2013 video games.

All the latest tour dates and additional band information can be found at the band’s social media links below.