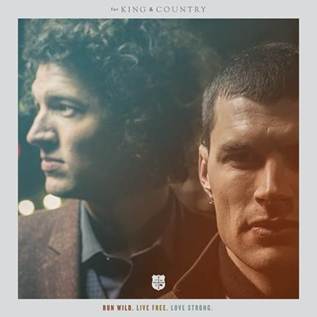 Featured on The Tonight Show with Jay Leno as a debut artist, gathering “New Artist of the Year” and “Breakthrough Artist of the Year” awards, and having the top-selling debut release from 2012 in its genre, for KING & COUNTRY launches into its next season with a new album and major market, 40-city fall tour.  Comprised of brothers Joel and Luke, the duo embarks on their “YOU MATTER – THE TOUR” Sept. 14 in Nashville (Franklin, TN) in support of their sophomore release, RUN WILD. LIVE FREE. LOVE STRONG., the highly-anticipated album releasing Sept. 16 and available now for pre-order on iTunes.

Hitting significant venues in cities like Los Angeles (Chino and Riverside, CA), Washington, D.C. (Woodbridge, VA), Pittsburgh, Indianapolis, San Diego, Las Vegas, Austin, Albuquerque and more before wrapping up in New York City Nov. 23, for KING & COUNTRY tour tickets are on sale beginning today at www.forkingandcountry.com.  All general admission tickets start at $10, with a special ticket/ autographed album pre-order of RUN WILD. LIVE FREE. LOVE STRONG. available for $19.99.  Through this site, there are also a limited number of $20 VIP tickets, which include early entry and a special Q&A session with Joel and Luke before the concert begins.  Being sponsored by Compassion International, the first round of tour dates on sale now are listed below.

While on tour, for KING & COUNTRY are planning a full night of live music, with no opening band, and will play their current hit single “Fix My Eyes” and more new music from RUN WILD. LIVE FREE. LOVE STRONG., as well as fan favorites like “The Proof Of Your Love” from their critically acclaimed debut album, Crave.

“While Crave was a great foundational piece, particularly if you have seen us live, you will see this springboard into a new and more developed version of what for KING & COUNTRY is with the rhythm and all of these different components,” says Joel, reflecting on the new album.  “One of the things that is really exciting with the album overall is that we have about 300-plus shows under our belts at this point with a group of guys that have become like brothers.  We have made these discoveries along the way—our love for rhythm, our excitement for theatrics. These sorts of things have naturally found themselves inside the new record.”

With soaring melodies, driving rhythms and powerful, personal themes of RUN WILD. LIVE FREE. LOVE STRONG., for KING & COUNTRY has created an album that lives up to the band’s name, a reflection of standing and fighting for something bigger than yourself, a mission statement that drove the duo from the first words written for this project until the last note was recorded.

The first single from RUN WILD. LIVE FREE. LOVE STRONG.,“Fix My Eyes,” has remained in the Top 5 on iTunes Christian/Gospel singles chart since its release May 1. In addition, Nielson BDS reports that the single had the most stations supporting first-week at Christian AC/CHR radio than any song since 2009, including 100% of the Christian CHR panel. With 98 reporting stations currently spinning “Fix My Eyes,” the song hits No. 10 on the National Christian Audience National Airplay Billboard chart and continues to climb.  The song also jumps to No. 3 at Christian CHR while hitting No. 11 on the AC Indicator chart. Fans can get an inside look at the inspiration behind the song “Fix My Eyes” and their exciting live show in this new video: http://smarturl.it/fixdoc.

for KING & COUNTRY “YOU MATTER – THE TOUR” dates currently on sale follow: