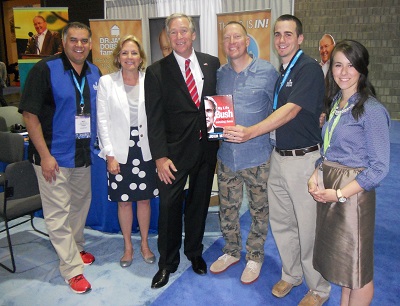 While at the conference, Morgan, an author and a finalist on ABC Television’s The Next Best Thing who is known as “The Definitive President George W. Bush,” met with and was interviewed by numerous media outlets and ministries, including Life Today TV, Family Talk With Dr. James Dobson and more.

“I had a meaningful and productive time at ICRS,” says Morgan. “It’s always a time of growth meeting with such dedicated servants of the gospel. It was great to hug old friends, and meet a bunch of new ones. I love ICRS!”

Morgan’s upcoming release, War On Fear, discusses Morgan’s personal struggle with fear that he says prevented him from achieving all the dreams God had placed on his heart. “Once I declared war on fear, it changed the way I lived and has provided me with victory and peace,” he says.

Though the book details his own story, Morgan has observed that every man and woman struggles with fear. His hope is that his new book will enable people to move forward toward their God-given dreams and not be bullied by unseen forces.

War On Fear follows the 2008 publication of My Life As A Bush…and My Heart for Imitating Jesus, co-written by Morgan and Vince Wilcox with a forward by Governor Mike Huckabee.

ICRS, featuring approximately 300 exhibits, brings together more than 2,000 attendees and exhibitors from the United States and more than 50 countries. The most recent show was held June 22-25 at the Georgia Congress Center.

For more information about War On Fear or Morgan, visit georgebushimpersonator.com or johncmorgan.com.

About John Morgan:
When John Morgan was discovered at a “Bush for President” rally in 2000, the Orlando, Fla., native went from selling appliances to performing during President George W. Bush’s official inauguration festivities. By 2007, Morgan was bringing his big-time comedic impersonation to arenas all across America, appearing live before tens of thousands on Sean Hannity’s “Freedom Concerts” and before hundreds of thousands on “The Winter Jam Tour Spectacular,” where he amazed audiences with his guitar playing and singing.

With a small cadre of “Secret Service” agents stationed around him, Morgan nods his head and greets the crowd with the President’s trademark Texas drawl. Morgan’s show combines his hilarious but respectful impression of President Bush with a few famous George W. faux pas, a mix of parody songs, and an inspiring message about hope and determination. He elicits heartfelt laughter from both sides of the political aisle.

Millions have seen him on America’s Got Talent, The Family Feud, Headline News, Hannity & Colmes, E! Entertainment Network, ABC’s The View, and The 700 Club. Fans even voted him a finalist on ABC TV’s celebrity reality show, The Next Best Thing. Morgan has won two Mirror Image Awards and a 2005 Cloney Award for Best Historical Impersonation. In 2009, he received The Grady Nutt Humor Award from the Gospel Music Association. Morgan has also been featured on NPR’s All Things Considered and has been interviewed by an international array of newspapers, including The Sunday London Times.

Morgan and his wife, Kathy, still reside in sunny Orlando with their four sons, Christopher, Stephen, Daniel and Jonathan, two wonderful daughters-in-law, and five exciting grandkids. Morgan’s inspiring journey is chronicled in print. My Life as a Bush…and My Heart for Imitating Jesus, with forward by former Arkansas Governor Mike Huckabee, is filled with laugh-out-loud stories, audacious encounters, and spiritual insights. Each chapter of Morgan’s story encourages readers to become imitators of the greatest Man who ever lived. He currently is touring to promote his next book, War On Fear.

For more information on Morgan, My Life as a Bush and the upcoming War On Fear, visit georgebushimpersonator.com or johncmorgan.com. Follow him on Facebook (facebook.com/BushGuy) or Twitter (@bushguy).