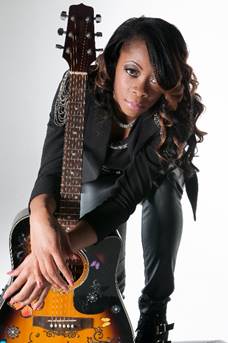 Many in the Gospel industry have been embracing new artist Sharetta-Nicole.  Not only are they enjoying the urban vibe and fresh sound of her lead single, “B.O.S.S. (Better Off Saving Souls)”, but they’ve been moved by her testimony.  Before the age of 15, she endured a sexual assault by a family member, the death of her father, the murder of her mother, and the loss of a brother to AIDS and her niece and nephew to a house fire.  At 15, she met the Lord and her life hasn’t been the same since.  Now she’s giving the same hope she received to those she ministers to in song.  She has just released her brand new concept music video for “B.O.S.S. (Better Off Saving Souls)”.  The video can be viewed below and the single is currently available on iTunes (link below).

The song, “B.O.S.S.”, was inspired by the crucifixion of Christ.  Sharetta-Nicole penned the song and says, “To me, a BOSS is someone who can endure and still come out on top,” she says.  “That’s exactly what Jesus Christ did on the cross.”  It’s also what God has allowed Sharetta-Nicole to do.  The bold and infectious track flaunts Sharetta-Nicole’s passionate vocals.

In addition to the first single, Sharetta-Nicole is prepping the release of her second single, “Holy”.  A zealous praise and worship song, “Holy” is another track written by Sharetta-Nicole.  “Holy” is a favorite at her live concerts and showcases a softer side of the recording artist.  “Holy” will be releasing this summer.

The Atlanta resident has been making moves in the Gospel music industry.  Already, she’s netted an Urban Inspiration Award and is a multiple nominee for Atlanta’s Hottest Gospel Award, the Independent Gospel Artist Alliance Award and the Rhythm of Gospel Award.  In addition, she will be performing at the upcoming Atlanta Gospel Choice Awards set for September 22nd.  Her first record, Level One: Jeremiah 29:11, was well-received and a new project is in the works.  She’s been blessed to open up for Canton Jones, Rance Allen, Earnest Pugh and Martha Munizzi.