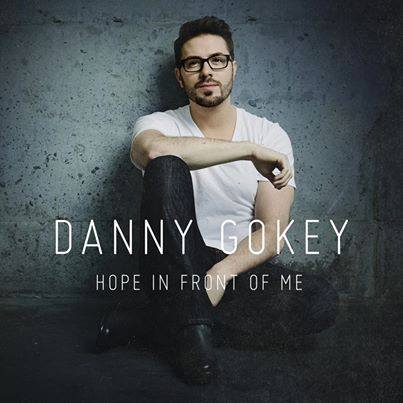 BMG recording artist Danny Gokey claimed the No. 1 spot on multiple Nielsen SoundScan Billboard Contemporary Christian music sales charts this week with his new album, Hope In Front Of Me. The title-track continues to climb the Christian radio charts, currently at No. 10 on the Christian AC Indicator chart and No. 18 on the Christian AC Monitored chart. “Hope In Front of Me” also ascended the top 30 this week on the AC Mediabase chart. CCM Magazine is featuring Gokey as their July 1 cover story; the piece is out this week and be seen here. Danny will also be featured on the nationally syndicated Keep the Faith radio show airing this weekend in more than 80 markets.

Danny continues his promotional tour with media appearances, radio visits and concerts around the country. He led worship at Lakewood Church services in Houston and appeared in front of sold-out crowds at his CD release concert in Milwaukee and the Cup of Joy Concert in Green Bay, Wis. during street week. He also performed at Milwaukee’s Land the Big Gig, which set record attendance. Danny performs at the Grand Ole Opry in Nashville, Tenn. on Saturday, July 5.

Danny’s album Hope In Front Of Me is available wherever music is sold, including online at iTunes, Amazon, and DannyGokey.com. Described by Gokey as “songs of hope and entertainment,” Hope In Front Of Me sees him joining forces with some of today’s most honored songwriters and producers, including Dove Award-winning “Producer of the Year” Bernie Herms (Natalie Grant, Casting Crowns, Barbra Streisand, Andrea Bocelli), multiple GRAMMY® Award-winner Keith Thomas (Amy Grant, Blake Shelton, Chris Mann, BeBe & CeCe Winans, Heather Headley), and Josh Crosby (Cher, Owl City, Mat Kearney). Resonant with hard-earned soulfulness and redemptive compassion, the album confirms Danny Gokey as a groundbreaking artist with a rare gift for deep connection with audiences everywhere.

ABOUT DANNY GOKEY:
A top 3 finalist on the eighth smash season of Fox’s American Idol, Danny Gokey soon entered the record books as the first-ever male American Idol contestant to sign with a major country label. An acclaimed singer and author, Gokey made an indelible first impression with 2010’s record-breaking debut album, “MY BEST DAYS” with the best opening week for a debut album from a male country artist in almost two decades. He received an array of honors, including his home state’s WAMI (Wisconsin Area Music Industry) Award for “Male Vocalist of the Year” as well as an American Country Awards nomination as “New/Breakthrough Artist of the Year.” Gokey is also active on an array of other fronts, including his role as founder of Sophia’s Heart. Named in honor of his late wife, the organization’s goals are to provide hope and help to homeless families, provide scholarships to deserving students, and operate a thriving inner-city music and arts program. Opened in late 2011, the 77,000 square foot Sophia’s Heart facility in Nashville has helped rescue over 75 families from life on the street. For details, please see www.sophiasheart.org.