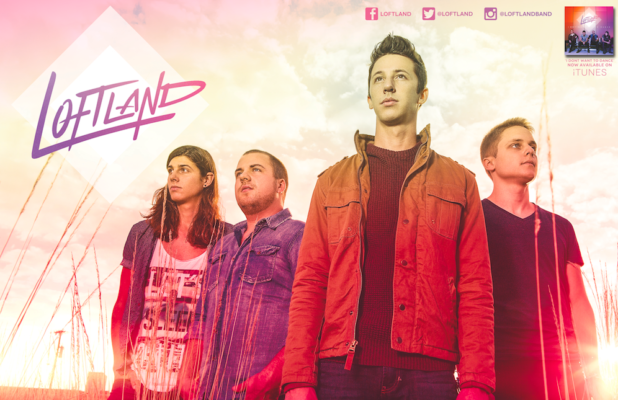 Get To Know Loftland Better…

With a busy touring schedule and a new album, you’d think that Wisconsin band Loftland don’t have much time for much else, but singer Dominic Gibbs recently sat down with DREAM Records to discuss the latest with the group and what’s to come.  So sit back and get to know Loftland…

1. Tell me a little bit about you guys. How did you guys get together to form the band?
We’ve been a band since 2007. Brother’s Dom and Tanner started it when they were still in high school. We used to cover Relient K and Switchfoot songs and play shows at local youth groups until word started getting out about us all over Wisconsin. From there we started writing and recording original music and playing further and further away from home. You can imagine how the rest goes!

2. Your new album, I Don’t Want To Dance released a few months back. Tell me about it.
We’re very excited about “I Don’t Want To Dance”! Because we had most of the songs written before signing with Dream, it’s really a collection of songs from over a span of 2 years and they’re about a wide variety of personal life events filled with hope, desires, faith, and some highs and lows.

3. What is your personal favorite song on the album and why?
We’ve always had special affections for our song Runaway. We feel like it sounds a lot different than a lot of the music that’s out there right now and we feel like it’s a universal story of our fear of facing God, in light of our sins, causing us to run away from him.

4. Who would you consider your musical influences in both secular and Christian music?
Our influences are always shifting but lately it’s been a lot of Michael Jackson, James Brown, Bruno Mars, and Switchfoot.

5. Which artist would you most like to tour with?
We really like what Rapture Ruckus and Group One Crew are doing right now and we’d be honored to share the stage with them!

6. Tell me who you’ll be touring with this summer and a little bit about the tour.
This summer we’ll be at a lot of the major festivals until August when we head out on tour with our friends Shonlock and Abandoned. We’re very excited about that tour!

7. You guys have a new single out called, “Runaway”. Can you tell me a little bit about the meaning behind it?
Definitely! Runaway is about the story of Adam & Eve, and honestly, the rest of mankind since. It’s about our gut reaction to our own sin. Our first thought is, “I need to hide this. I need to get away where no one can see what I’ve done.” The bridge lyric is “Give up, my love is a lion, fierce and free, relentless and violent, you know there’s no place left to run.” And that’s just talking about how faithful God is relentlessly pursue us and hunt us down to consume us with his love, despite what we’ve done. It’s the Gospel, you know?

8. You recently charted #2 on the UK Christian radio charts. Have you ever been to the UK?
Not yet. Yet! We’d love to go someday.

9. Do you guys have a favorite charity? How did you get involved with that?
We sponsor a child through Compassion. We got connected with them through our good friend Eric Samuel Timm. Great organization!

10. What is your favorite scripture and why?
Philippians 2:3-4 – “Do nothing out of selfish ambition or vain conceit. Rather, in humility value others above yourselves, not looking to your own interests but each of you to the interests of the others.” We spend a lot of time with one another. We’re constantly working, eating, sleeping, writing, driving, playing music, and relaxing…together. And usually in very close quarters because 15 passenger vans and hotel rooms aren’t very big, you know? When it gets hard to be around one another and all we really want is a little bit of space and privacy, this verse is an incredible reminder of the character of Jesus and how he’s called us to live and lover one another. Sacrificially.

To pick up their album, I Don’t Want To Dance text: “Loftland” to 51555 or visit them on iTunes