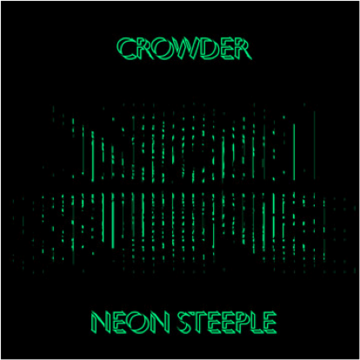 sixstepsrecords/Capitol CMG artist Crowder makes his worldwide solo-debut today with the release of Neon Steeple. His single “I AM” has made impressive waves at radio, reaching No. 3 on the National Christian Audience chart over the weekend. Paying tribute to the folk/country influences on the new record, Crowder will make his Grand Ole Opry debut this Saturday, May 31 in Nashville.

Upon the release of the album, Neon Steeple shot to the Top 10 on the iTunes Overall Albums Chart. Featuring 14 tracks and 3 bonus tracks, Neon Steeple includes a moving duet with music icon Emmylou Harris on “My Sweet Lord.” The track was featured on USA Today’s weekly playlist here:http://www.usatoday.com/story/life/music/2014/05/26/nicki-minaj-pills-n-potions/9601807

Critics are acknowledging the risky, innovative musical direction on Neon Steeple, and yet are praising Crowder’s solo debut as a “musical tour de force.”Here’s a sampling of the acclaim:

“Neon Steeple is a rugged, homey album that melds sacred sounds from the past with present-day praise. And Crowder is a creative wordsmith, as evidenced on tracks like ‘Come As You Are.'”
-Rhapsody

“[Neon Steeple] encompasses a world of unsurpassed listening: personal, devotional, and congregational worship. What a concept.”
-Worship Leader, 5 out of 5 star review

“Without a doubt, Crowder has returned to the forefront of the music scene with songs of hope, grace, and a whole lot of transparency. Crowder, it’s good to have you back… and with much respect, better than ever.”
-JesusFreakHideout.com, 5 out of 5 star review

“This album stands out in its genre and, even though it was risky, created a fresh sound that will intrigue both the solo-Crowder-era new listeners and longtime fans.”
-NewReleaseTuesday.com

“Only a musical and worship filled creative mind such as Crowder could pull such an album like this and make it work.”
-Breathecast.com

“Crowder is a standout among his peers and always has been. He has always been willing to play with sound and take risks that others may not be willing to take. That should be applauded.”
-Faith Village

“Neon Steeple, while a new musical direction and horizon for Crowder, should be an instant hit with fans.”
-The Front Row Report

“Crowder reasserts himself as a musical tour de force, making music that is as artistically successful as it is lyrically. The fusion of the old and the new comes across as effortless in the artist’s hands…”
-The Sound Opinion

Last Sunday, Crowder held an album release party at Passion City Church in Atlanta to commemorate to culmination of his solo debut. Crowder spent the evening playing through the new songs from the album, leading a packed room in a night of celebration and worship.

About Crowder:
Crowder has been embraced for his lyrically powerful and musically elaborate and unpredictable songs that have found themselves being sung everywhere from churches to clubs all across the country. In November 2012, Crowder released his first solo project, Crowder: iTunes® Session which delivered nine stripped down organic tracks to many of Crowder’s most loved originals. As part of the David Crowder*Band, they were named one of the “most thoughtful, progressive and exciting acts in contemporary Christian music” by The New York Times, garnering nine Dove Awards, 22 Dove nominations and two GRAMMY® nominations. The band released their final collection of new music with the GRAMMY® nominated project, Give Us Rest (A Requiem Mass in C [The Happiest of All Keys]). The record entered the Billboard 200 chart at No. 2 and gave the band their highest debut in their 12-year career. Continuing to perform as part of the Passion movement, participating in university student gatherings in the US and around the world, Crowder has also penned two books including his acclaimed release, “Everybody Wants to Go to Heaven, but Nobody Wants to Die.” Crowder’s solo album debut, Neon Steeple, is available now.