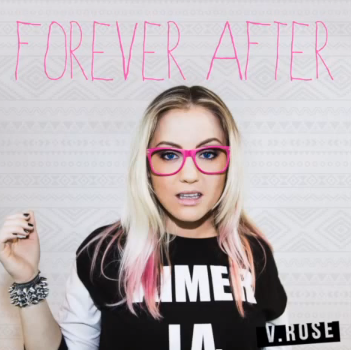 Forever After, the highly-anticipated sophomore studio recording from one of Christian music’s leading urban/pop vocalists and songwriters, V.Rose, drops today from Clear Sight Music. Produced by Lamontt SPEC Blackshire and executive produced by FLAME, the project offers 12 new tracks as well as a bonus cut, and features collaborations with some of the top names in Christian rap and hip-hop.

Highlights of Forever After include the lead single, “Am I Trending?” (feat. FLAME); “Forever Endeavor” (feat. Shonlock); “Worshipping Tonight” (feat. Da T.R.U.T.H.); “No Better U”; “Tortured Mind” and the bonus cut, “Turn Up Your Light” (feat. KJ-52), among other selections.

“My hope is that this record will cause people to see their lives in relation to eternity, to stop and think about the things they say and do, and ultimately realize the realness of Christ and His return,” V.Rose says. “The album is based on Revelation 21. The chapter talks about Heaven and eternity with God and how there will be no more tears, death and crying because He is making everything new. We will all spend eternity somewhere and what we do in this life does count for something, so don’t throw it away believing the ‘YOLO’ lies. Everybody lives twice.”

“It is important for me to communicate this message because I know young minds are so easily persuaded by things that look harmless, but are actually very dangerous,” she continues. “If I can be any kind of light or role model to combat the attractive—but damaging—messages being shoved in people’s faces, then I will.”

Alongside such artists as Kristian Stanfill, House of Heroes, Everfound, and Love & The Outcome, V.Rose was recently named by NewReleaseTuesday.com as one of “The 10 Most Underrated Artists in 2014,” saying, “Women are far underrepresented in Christian music’s urban/hip-hop subgenre, and V.Rose is the leader of a new class emerging. …If ‘Turn Up Your Light’ and her ‘All Burns Down’ from Clear Sight’s Jesus Or Nothing are any indication, V’s upcoming Forever After album—which is said to present that urban-dance-pop awesomeness on steroids—should be one of the under-the-radar, don’t-miss tracks of the year.”

V.Rose is currently debuting selections from Forever After on the Black Out Circuit Tour, headlined by FLAME with feature artists KB, Thi’sl, and Da T.R.U.T.H. The eight-city tour is hitting St. Louis; Phoenix; San Bernardino, California; and Louisville, Kentucky, among other markets, before wrapping June 1 in Miami.

Hailed as one of Christian music’s most innovative and versatile urban/pop vocalists and songwriters, V.Rose’s critically-acclaimed self-titled debut bowed in 2011, followed by The Electro-Pop Deluxe last year. She has been featured on two tracks from FLAME’s #1 Billboard Gospel release Captured, including the hit single “Surrender.” Los Angeles-based V.Rose has been singing and writing since childhood, and is committed to creating distinctively Christ-centered music with a cutting-edge artistic signature.