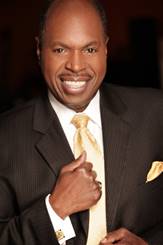 Gospel Artist Conrad Miller has been gaining popularity with the success of his most recent project, Keep Pressing. Two singles, the up-tempo “I Need You” and the spirited “Lift Your Voices”, have been inspiring Gospel music lovers young and old. Now the recording artist and songwriter is releasing his third single from his sophomore project called “I’m Living”. The new single has been serviced to Gospel radio.

Penned by Philadelphia-based songwriter Jacki Cordery, the track reminds the listener that we’re “living to live again”. Produced by GRAMMY, Stellar and Dove Award Winner Steven Ford, the song is a mid-tempo inspirational head-bobber about sowing here on earth to reap greater rewards in Heaven. With a catchy hook, the song is a favorite when Miller performs the cut live.

According to Miller, “when Steven Ford and I first heard an early demo track of the song, I got goose bumps! That’s when we knew it belonged on this project. That was the Holy Spirit at work. Now, through this song, we get to remind everyone what we’re living for!”

Recently, Miller has been seen on the Trinity Broadcast Network, on the Herman & Sharron Show on the Christian Television Network and on TCT. The Pressing Towards Your Vision Nominee for Traditional Male Artist, Conrad has also recently been featured in Christian Voice Magazine and Promoting Purpose Magazine. Later this year, he will be stepping back into the studio to begin work on his third release. For more information on Conrad Miller, log on to www.ConradMillerMusic.com. Connect with Conrad on Facebook and Twitter (@ConradMillcon).