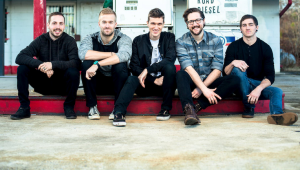 “Into My Arms,” the Top 10 single from Birmingham, Alabama-based rockers Embers In Ashes, has become a mainstay at radio, spending more than six months on the Christian rock chart. Inspired by the personal journeys of two band members who experienced abandonment by their fathers, the hit song is featured on Killers & Thieves, the group’s critically-acclaimed third recording.

Crosswalk.com recently spotlighted the album: “‘We’re killers. We’re thieves. We’ve got nothing You need,’ sings Embers in Ashes front man Jeremy Bates on the title track from his impressive band’s second full-length album, Killers & Thieves. That gut-level honesty in talking with God consistently matches the intense post-metal progressive rock that he and his mates die-cast into the listener’s consciousness throughout this taut thirty-three minute set. In general terms of the genre, these guys really are on fire. …sincere thoughts and passionate playing make Killers & Thieves a rock record worth stealing time to hear.”

NewReleaseTuesday.com says, “This sophomore release is crammed with edgy-yet-melodic rock goodness from start to finish. …Embers in Ashes have created a meaningful and passionate rock record that successfully executes a thoughtful blend of headbanging riffs, singable melodies, passionate vocals, and meaningful lyrics into a cohesive package.”

HM Magazine also weighs in on Killers & Thieves: “Bright guitars, and crisp drums flow through the speakers as if you just took a bite of a juicy apple—not too bitter and not too sweet—the opening track, ‘Set Fire,’ sets the pace. Hailing from Alabama, Embers In Ashes has hints of Southern rock and metal throughout its solid backbone.”

Released in February, Killers & Thieves was produced by Chris Galves and Joel Wanasek. The project includes nine songs written by the band, along with an instrumental selection. Following the success of “Into My Arms,” the album’s second single, “The Mirror,” will be serviced to Christian rock formats next month.

Since its inception in 2010, Embers In Ashes has released the Sorrow Scars EP (2011) and Outsiders (2012); charted the Christian rock hit “Then You Came”; scored performance slots at such leading events as Atlanta Fest and Bayfest; and shared stages with touring rock powerhouses The Classic Crime, To Speak of Wolves, and As Cities Burn, among others. The band is a frequent headliner at both Christian and mainstream venues.

Buy Killers & Thieves from these, and other retailers:
iTunes | AmazonMP3

Check out the lyric video for the lead single “Into My Arms” below, and be sure to grab your free download of the song from us here.