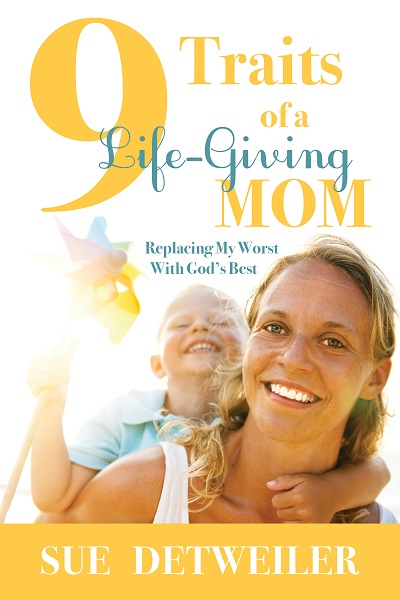 Morgan James Faith, an imprint of Morgan James Publishing, announces the release of the debut book, 9 Traits of a Life-Giving Mom: Replacing My Worst With God’s Best, from Bible teacher and speaker Sue Detweiler. The digital version is available as of the end of last week on Amazon and the author’s website with the print version slated to hit bookstore shelves in October.

“I remember what it was like to have seasons where the cost of buying a book was not in the budget for me as a mom. I wanted everyone to be able to either get the book for themselves or share 9 Traits of a Life-Giving Mom with all of the moms in their lives,” says Detweiler.

To purchase or to learn more about the 99-cent promotional price, visit suedetweiler.com.

The book, according to Detweiler, who is the mother of six, is not a parenting how-to book, but, rather, a book intended to reach into the hearts of moms to help them overcome unresolved issues, find peace with their imperfections, learn from their mistakes, tap into God’s power to break negative patterns, and joyfully, as Detweiler says, “become the best you.”

“The book is not about how to raise the perfect child,” Detweiler says, “It’s more of a conversation with moms of all ages, to help them when they are feeling overwhelmed,” she says, adding that she hopes the book reaches out to those moms going through a difficult time, particularly for those who know they should embrace being a mother, but for whom it doesn’t come naturally.

Each chapter begins with one of the nine traits of a life-giving mom, which correspond to the nine fruits of the Spirit as outlined in Galatians 5, and concludes with an intimate prayer to God asking for help and guidance. Detweiler utilizes the concept of opposites to make her point: His love replaces our anger; His joy replaces our sadness; His goodness replaces our manipulation.

The book also incorporates a study guide intended for individual or group study.

Inspiration for the book, according to Detweiler, came after she realized how challenging it was to be a mom herself, while dealing with the myriad of distractions in our ever-changing world.

In addition to raising and homeschooling her children, now ages 14 to 24, including two sons that she and her husband adopted five years ago, Detweiler has also juggled a role in pastoral ministry for much of her adult life. Detweiler has served as principal of New Song Christian Academy, where her children were enrolled, and supervised the LIFE School of Ministry, where she helped prepare pastors and leaders for ministry.

“While I had all these other responsibilities on my plate, I was still a mom,” she says, “and it wasn’t always easy. I wanted to be ‘the best mom in the world’ to my children, but sometimes I felt like the worst.”

In the book, Detweiler is unafraid to reveal the times she wasn’t at her best. She describes a life-changing season which followed the night she and her infant daughter almost died in a house fire.

Detweiler, a new mom, was home alone with five-week-old Rachel when their house caught on fire. It is believed that an arsonist ignited the empty home next to them, setting three homes ablaze. To make matters worse, the fire department was delayed by a train and only one fire truck was on the scene to deal with all three fires. Because of the smoke, Detweiler was disoriented and was unable to get to her daughter.

“My husband arrived in time to alert the firemen to our situation and we were saved. We were happy to be alive, but you can imagine the emotions,” she says. “We didn’t have a house. We didn’t have diapers for the baby. We lived at a neighbor’s home until we could get things sorted out.”

At the same time, Rachel developed colic, spending three to four hours each night screaming. The pressure was almost too much for Detweiler, as she recounts in Chapter 1 of the book.

One day, I laid Rachel down on the blanket and slowly backed away. Her screaming drove me to the edge of feeling like I couldn’t cope. I began to feel claustrophobic and trapped. My heart raced as my mind shut down. “I’m losing it,” I thought. “If I don’t get out of the house, I don’t know what I will do.” I went to the kitchen and dialed the number of a neighbor.

“Can you take my baby?” I quietly pleaded, as soon as she answered the phone. “I have to get out of here.”

Hearing the tremor in my voice, the neighbor agreed to help me. No doubt, she saw my glazed look as I handed her my infant and drove off. What would have happened if she hadn’t been there for me? I don’t know. I was truly desperate.

Desperation is a driving force in our lives to seek change. It is during the pressure-cooker seasons in our lives when we find out our areas of weakness and vulnerability. Pressure cookers are known for being hot, dangerous, and able to blow their lid. That house fire revealed the hidden habits of my own heart that needed God’s healing touch. It’s the heat of life that shows the hidden fractures of our hearts. A Life-Giving Mom uses the pressure-cooker seasons to reevaluate. Allow your own areas of need to propel you toward getting help. As you learn new skills, you will become a better person as well as a better mom.

“Some books for parents include all of the ‘good parenting’ stories,” she says. “But I tell my ‘bad parenting’ stories–those moments when I didn’t make the right choice, when I felt overwhelmed, when I blew it. I use those examples to reach out to the mom who wants to walk with God, who wants the fruit of the Holy Spirit to be evident in the way she parents, but who is coming to grips with how often she ends up falling short.”

Detweiler has already heard from some readers, who received advance copies, that the book’s audience extends beyond mothers of young children.

“This book is for moms of all ages,” Detweiler says. “Anyone who desires to change and become all God created them to be will find healing and hope through my story. I’m even receiving a great report from those dads and single women who have read the book. God’s message of hope brings healing to hearts.”

Morgan James Publishing has been named to Publisher’s Weekly list of fast-growing independent publishers three times. According to PW’s Lynn Andriani and Jim Milliot, “Morgan James makes an extraordinary effort to help its authors to grow their own business.”

About Sue Detweiler:
Sue Detweiler is a mother of six, author, speaker and Bible teacher. Her Healing Rain radio feature is heard on many Christian radio stations across the country. Her internet radio program, Inspiring Women, features interviews with authors such as New York Times best-seller Dan Miller (48 Days To The Work You Love).

As a faithful steward, Detweiler has developed her God-given talent to communicate and articulate profound truths in simple and relatable ways. Her experience in marriage, motherhood and ministry exemplifies the life of a woman who has embraced her call and is fully alive to all that God has created her to be. Her debut book, 9 Traits of a Life-Giving Mom, releases May 9, just in time for Mother’s Day 2014, with the print version following in October.