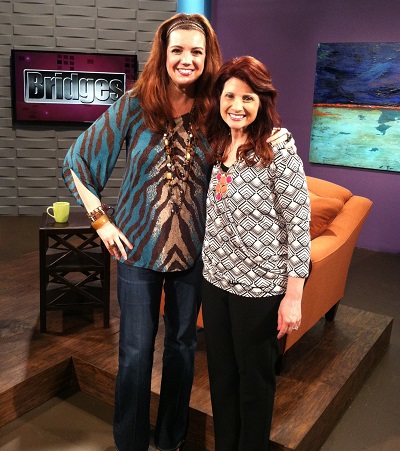 Dove Award-winning singer/songwriter and speaker Cheri Keaggy is a guest on today’s edition of Bridges, the flagship program on the Christian Television Network. During the show, Keaggy discusses how God restored her following the divorce from her high school sweetheart, and offer hope to people who may be struggling with divorce. Monica Schmelter hosts the series, which airs on WHTN in Nashville at 9:30 a.m. C.T. and 8:30 p.m. C.T., with a repeat airing at 5:30 p.m. C.T. on Saturday, July 27.

“I’m always glad for an opportunity to chat with Monica,” Keaggy says. “Our goal was to encourage people who have believed for a healed marriage but didn’t get one. Through my divorce, I discovered that God can see us through anything and will use our shattered lives for His glory if we’ll let Him. He cared for me and my young adult children in very specific and tangible ways. Perhaps someone watching needs to take hope in that and know that there is life after divorce.”

“We sought Cheri Keaggy out to be a guest on Bridges to share her story of recovering from divorce because Cheri is transparent and offers the hope of healing,” says Schmelter, who, in addition to hosting Bridges, is general manager of WHTN Christian Television Network. “Cheri offers honesty, compassion and real life experience and that’s just what our viewers are looking for.”

CTN’s mission is to bring positive Christian programming with unique and wholesome values with award-winning programs reaching individuals and families, spanning all socio-economic boundaries and providing them with the best in Christian television today.

Bridges is taped at the Nashville CTN studio, where broadcasting began in June 1986. The daily show, hosted by Monica Schmelter, goes beyond the convention of TV “talk and magazine” shows by going to the root of today’s challenges and issues. Bridges embraces a biblical worldview and works to mend the brokenness of contemporary culture by building connections between God and people. Visit monicaspeaks.com for upcoming show information. Bridges airs Mondays through Fridays at 9:30 a.m. C.T. and 8:30 p.m. C.T. and Saturdays at 5:30 p.m. C.T. For more information, visit ctntv.org.

About Cheri Keaggy:
Cheri Keaggy began her career as a worship leader at a small church in Southern California before recording her debut album on Sparrow Records, Child of the Father, in 1994. Honored with a Dove Award nomination for New Artist of the Year, Keaggy has gone on to record seven additional albums, resulting in nine No. 1 songs, three Dove Award nominations and a Dove Award win. After more than two decades in music, her ministry has expanded to include speaking engagements as well. Keaggy’s latest release, So I Can Tell, which was released in 2012 on her Psalm 91 record label, is Keaggy’s first CD since her independent 2007 release, Because He First Loved Us.

Under the guidance of Gospel Music Hall of Famer and legendary guitarist Phil Keaggy, Cheri Keaggy called on the combined talents of Scott Dente and Ken Lewis from Global Genius Productions to produce So I Can Tell. The combination of rich, acoustic sounds with Cheri Keaggy’s signature plaintive vocals and searingly honest lyrics has resulted in a project that confronts life’s realities, even when filled with despair, and offers listeners the way to navigate through the challenges to a place of hope through Christ.