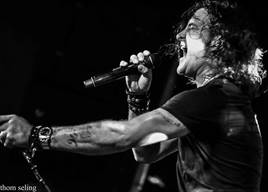 What Critics Are Saying About The Proof of Life Tour:

Grammy and Dove-Award winning artist Scott Stapp will get back out on the road this summer, announcing the second leg of his acclaimed 2014 Proof of Life Tour a few days ago. Stapp will play a series of special intimate shows for his fans beginning June 13, 2014 at Ziggy’s in Winston-Salem, NC. Tickets are on sale from today onwards.

While on tour, Stapp is taking his fans on a journey through his mega Creed hits like “With Arms Wide Open,” “Higher,” “What If,” “My Sacrifice” and more, alongside new music from his current album, Proof of Life, which released on Wind-up Records Nov. 5, 2013. The album sparked Stapp’s first No. 1 Christian single, “Slow Suicide,” while its title track, “Proof of Life,” climbs to No. 15 this week on the Billboard Christian Rock chart, gaining airplay at stations like WMKL (Miami), KCLC (St. Louis), WYSZ (Toledo), WJTL (Lancaster / York / Harrisburg, PA) and KORB (Santa Rosa, CA), as well as Sirius Satellite Network and more national outlets.

Stapp is also playing live in concert his current Top 20 and climbing Billboard Christian Hot AC/CHR hit, “Only One.” Stapp gives voice to the steadying and sacred force that keeps him afloat in the song. “It’s that still small voice inside,” he says, “My heart tells me that God is always there, `even when you feel your breath fading from your lung,’ God is reaching out to accept you in ways that renew your spirit and energize your soul.”

The first leg of Stapp’s U.S. tour wrapped April 9 in Atlanta, GA, and was followed by a European tour that saw him play to packed venues in the UK, Germany and the Netherlands. Stapp also plays his first-ever Christian music festival in the US, Sonshine Festival July 16, followed by Creation Festival Northwest Aug. 1, Soulfest Aug. 8 and more summer festivals to be announced soon. See www.ScottStapp.com for all the latest tour dates and ticket information.

Proof of Life was produced by Howard Benson and mixed by Chris Lord-Alge. It debuted at #7 on the Billboard Rock Chart and #35 on the Current Album Chart. It’s Stapp’s first solo album since 2005’s certified platinum, The Great Divide, and includes the first new material since the release of his 2012 uncensored memoir, Sinner’s Creed, in which Stapp shared his life story for the first time—from his fundamentalist upbringing, the rise of Creed, his ongoing battle with addiction, the rediscovery of his faith and the launch of his solo career. The gripping memoir is “proof” positive for Stapp that a higher power is always present, despite the colossal messes we sometimes make of our lives. Proof of Life is an 11-track collection of songs that chronicles the extension of his journey.

The new songs reflect the maturity and wisdom of an artist that has sold nearly 30 million albums with Creed, had three Grammy nominations and one win for Best Rock Song with “With Arms Wide Open,” received a Dove Award for his song/performance of “Relearn Love” as part of The Passion of the Christ: Songs, and had 11 No. 1 Singles with “My Own Prison,” “Torn,” “What’s This Life For,” “One,” “Higher,” “What If,” “Are You Ready,” “With Arms Wide Open,” “My Sacrifice,” “One Last Breath” and “Overcome.” Creed put out six albums – My Own Prison (1997) 6x Platinum, Human Clay (1999) 11+ million (Diamond), Weathered (2001) 6x Platinum, Greatest Hits (2004) 2x Platinum and Full Circle (2009) Certified Gold.