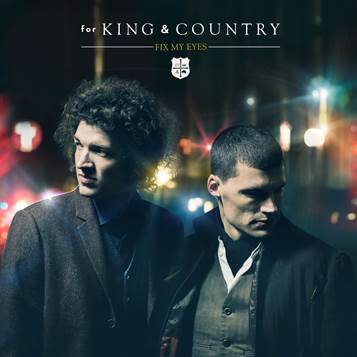 for KING & COUNTRY, reigning Dove award-winner for New Artist of the Year and the K-LOVE Fan Awards Breakthrough Artist of the Year, are back with their new single “Fix My Eyes.” The song is their highly anticipated debut single from their forthcoming sophomore album to be released this fall. As of yesterday, “Fix My Eyes” is available to download on iTunes in tandem with the first day of voting for the duo’s nomination for ‘Best Live Show’ at this year’s K-LOVE Fan Awards on June 1.

Get “Fix My Eyes” on iTunes here.

“If you can picture it, it was fall 2012,” says the duo, comprised of brothers Joel and Luke from Australia. “We were crisscrossing the United States on our first ever fall tour,” reflects Joel. “There were nine of us stacked in a 15-passenger van including Luke’s wife Courtney, who happened to be seven months pregnant at the time. And, I was walking through a very unstable time in a relationship. And to top it off, Luke had begun feeling unwell leading to him being diagnosed with a digestive disorder. In contrast, all of this took place while our debut record CRAVE was being embraced with open arms and one song in particular, “The Proof of Your Love” had become an anthem to folks around the globe.”

“It was in that moment, in the midst of mayhem, that we sat quietly in a room together and asked ourselves a few questions. Who are we? Why are we here? What do we stand for as men, and as musicians? From there, we came up with a list of sorts, which was this:

To love like we’re not scared.
Give when it’s not fair.
Live life for another.
Take time for a brother.
Fight for the weak ones.
Speak out for freedom.
Find faith in the battle.
Stand tall, but above it all… Above all those ‘good’ things, let’s aim for the best thing. Let’s fix our eyes on God.

Out of that list was born a song. And now, a little over a year later, and after opening with this tune at almost every show since, we are proud and quite pleased to present it to you.”

for KING & COUNTRY will perform “Fix My Eyes” during the K-LOVE Fan Awards on June 1 at The Opry House in Nashville, TN. They are nominated for the “Best Live Show” award. Go to www.KLOVEfanawards.com to cast your vote.