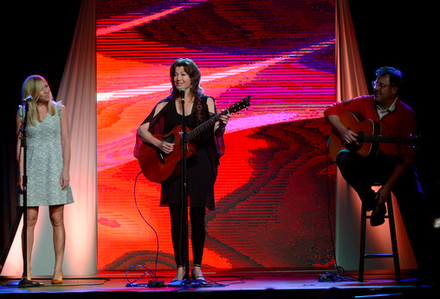 Last evening, singer/songwriter Ellie Holcomb was part of the first GMA Honors Celebration and Hall of Fame Induction. Holcomb was on hand as her father, famed music producer Brown Bannister, was inducted into the GMA Hall of Fame.

Kicking off the night, Holcomb took the stage with Amy Grant and Vince Gill as they performed an astounding version of Grant’s song “El Shaddai.” The GMA Honors Celebration and Hall of Fame Induction was held at Allen Arena at Lipscomb University in Nashville, Tennessee.

This singer, songwriter and storyteller released her solo debut, As Sure As The Sun, on February 18 to huge acclaim, hitting No. 2 its first week on the Christian chart and No. 1 the Christian genre on iTunes and at Amazon in its first week! The first radio single, “The Broken Beautiful,” is currently climbing the AC Monitor and National Christian Audience charts and continues to be added to stations and heard by millions across the country.

As Sure As The Sun (Full Heart Music) was produced by Brown Bannister and Ben Shive. The album has been touted as one of the top records of the year and a “must-have” album in everyone’s music library. A review in the Examiner sums it up well, stating, “Holcomb sings her honest, vulnerable thoughts to God…There’s innocence about her love songs to Jesus that is refreshing in an age when Christian artists seem to be trying too hard to sound overly worldy.”

MORE ABOUT ELLIE HOLCOMB:
A Nashville native, Holcomb is a seasoned artist as well as a wife, mother, and a former schoolteacher. For the past seven years, she’s been part of her husband’s band, Drew Holcomb and The Neighbors. Last December she was the special guest on Andrew Peterson’s annual “Behold The Lamb of God” Christmas Tour and is appearing at various venues and festivals across the U.S. this year, such as KLTY’s Celebrate Freedom and AtlantaFest. Holcomb wil alsol appear on many fall dates with Crowder.

As Sure As The Sun began with a very successful Kickstarer campaign.

Setting out last November with Kickstarter to garner support for the making of her album, Holcomb’s goal was for $40,000 to be raised in 50 days. That goal was met in just three days and she ended up raising over $108,000 with 1,756 backers. This highly successful campaign placed her 4th overall top Christian Kickstarter Campaign, as well as placing in the Top 30 Most Funded Kickstarter Music campaigns of all time.

Her debut LP is the follow up to her two EP’s With You Now and Magnolia and features eleven songs written by Holcomb, each carefully woven with scripture into the lyrics. Encouraged by her husband to record her own music, Holcomb’s hope with her new collection of songs is that they will be reminders of truth by refreshing, encouraging, and blessing all who hear them.

To find out more about Ellie Holcomb, please visit www.EllieHolcomb.com or click on the links below.

Read our review of Ellie Holcomb’s As Sure As The Sun here.