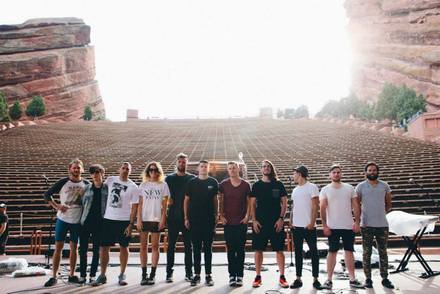 Hillsong UNITED continues to make waves with their top-selling song, “Oceans (Where Feet May Fail),” as they received their career first No. 1 radio single. This song comes from Zion, the band’s most successful and fastest selling album to date, which released February 2013.

“Last year when Zion released, we saw ‘Oceans’ climb the sales charts as well as the positive fan response to this song,” shares Grant Hubbard, Capitol CMG Label Group, Vice President/National Promotion. “Knowing the song was so special and resonating with the listeners, we wanted to get it into the hands of the radio programmers. UNITED continues to make history with this album and this song, and we are so thrilled to see them receive their first well-deserved No. 1 radio single.”

In 2013, UNITED had an outstanding year with Zion’s release topping iTunes overall and debuting at No. 5 on the Billboard Top 200. The group also toured around the world, including the U.S and selling-out top venues such as Red Rocks Amphitheatre, Hollywood Bowl, Radio City Music Hall and more. This year UNITED released The White Album [Remix Project] that debuted at No. 1 on the Billboard Dance/Electric Albums chart and remains on the chart seven weeks after release. The album also had a limited run on vinyl for Record Store Day earlier this month.

About UNITED:
UNITED is a worship band that originally rose out of the youth ministry of Hillsong Church in Sydney, Australia. This progressive worship band is a global recording and touring entity sent out to share the ever-evolving worship music of Hillsong Church to an international audience through live performances and records. Releasing their first album in 1999, UNITED has toured six continents and 42 nations since 2006. The touring entity of UNITED has made a huge wave in the United States as they became the first Christian artist to ever sell out Los Angeles’ Staples Center. In addition to the Staples Center, UNITED has also sold out major venues in Seattle (ShoWare Center), New York (Radio City Music Hall – Hillsong Conference), Denver (Red Rocks Amphitheatre) and Los Angeles (Hollywood Bowl). UNITED has the largest social media following for a Christian artist with more than 4.9 million Facebook likes and 778k+ Twitter followers.