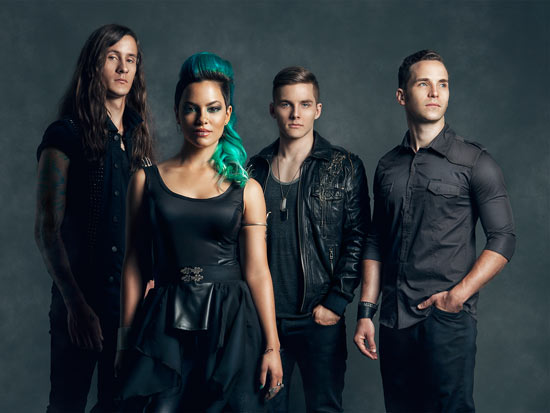 An Interview With VERIDIA…

On Feburary 25th, VERIDIA released their debut EP Inseparable, and I recently had the pleasure of discussing some of the band’s background with lead singer Deena Jakoub…

JW: How did VERIDIA get started?

Brandon and I have played together for many years, starting in Dallas, and there was a point where Nashville started calling our name. With a different industry of writers and musicians, we wanted to collaborate with as many people as possible, and through some mutual friends we met Trevor and Kyle. Now we have been together in Nashville for about a year.

JW: How was the name VERIDIA chosen?

It was quite a long process, because it took awhile to figure out a solid name that really represented us as a whole, and something that we felt we could live by on a daily basis. I was heavily influenced by the poet Kahlil Gibran, as I read a lot of his works within the last year, and there was a section of one poem on truth that says: “Truth is like the stars; it does not appear except from behind obscurity of the night.” It was something that stuck with me, so we kept looking for different interpretations of truth through different languages, and that’s where we came across veritas, which is the Latin word for truth. VERIDIA is a combination of the English word veridical and the Latin word veritas.

JW: How would you describe the sound of your band?

JW: Are their any bands or singers that have influenced your sound?

As far as this specific EP, I think we were all influenced by whatever has influenced us in the past and our childhood, and listening to a bunch of different styles. What I was listening to during the record was a bunch of new bands, like Chvrches and Twenty One Pilots, and there’s even some poppier bands like Panic At The Disco that I would listen to.

JW: As you and Brandon are former members of Don’t Wake Aislin, is VERIDIA helping you both show a different side to your music?

Once that was over, we wanted to start fresh and still wanted to play music. We met a lot of really awesome talent here [Nashville] and a lot of different people that are open to collaborating. Just creating art together, it was an experience of how beautiful we can come together as humans, creating something so beautiful as music, which is such a universal language. I think that we are still obviously influenced by rock, but since we’ve meet Trevor and Kyle, we’re blending in their styles.

JW: What is your favorite song to perform from the EP?

Definitely “Mechanical Planet,” because for me I really love poetry, spoken word and theatre, and for me it’s an opportunity for me to take on a different character and attitude. It’s really high energy too, so we all get to take on this persona and perform on the stage with an energetic vibe, and I think it’s really fun.

JW: What has been your biggest challenge as a band?

The name was probably one of the biggest challenges. Coming up with something that we all agreed on that could actually represent. Since we’re female fronted, it’s hard to have a name that can have the vibe there’s a female in it, but also there’s a bunch of guys, and also relate to audiences as well. That was one of the toughest decisions we had to make.

JW: Any news on Veridia going on tour sometime soon?

Not an extensive tour, but there are several festivals in the works. A couple in Texas, like Rock The Desert, and one in Indiana. There’s also a couple mainstream ones, like Suburbia in Dallas, and Gulfport in Mississippi. There’s sporadic shows throughout, but we’re definitely open to hopping on tours as soon as possible. Since this EP just released, we’re all amped up and ready to hit the road.

JW: If y’all could choose to tour with anybody, who would you tour with?

It’s kind of hard to answer for all of us, but I think it’d be really fun to play with Panic At The Disco, because they have an eclectic vibe and I really like there style lyrically, I think we could mesh. It’d also be fun to tour with Skylar Grey or Maroon 5.

JW: Any details on when a full length record might be coming out?

No specific details right now. We are writing for it on the moment, but once our EP just came out, we want to get out on the road and travel with that for a little while. We will probably get back into the studio closer to the end of the year.

JW: Do you have anything else you’d like to let your fans know?

I hope we can come to every single city in the U.S. in the next year, I seriously want to play 300 shows.

JW: I appreciate you Deena taking the time, thanks.

Yea, for sure, we really appreciate you.

You can read my review of VERIDIA’s Inseparable EP here.