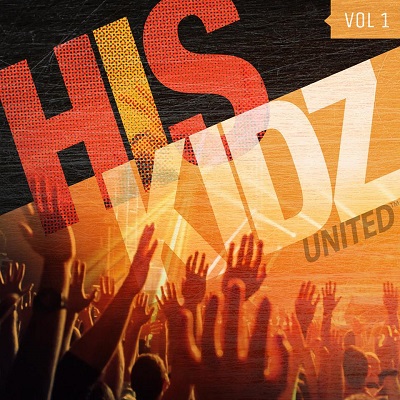 Kidz United and INgrooves/Capitol Christian Distribution have announced the upcoming release of the His Kidz United CD series, a music brand for kids ages 5-14 which features kid-sung versions of today’s top Christian hits, including “Overcomer” by Mandisa, “Shake” by MercyMe, and “Speak Life” by TobyMac.

On April 29, His Kidz United, Volume 1 releases to major retail outlets, including Family Christian Stores, Walmart, Lifeway, Mardel Christian Stores, iTunes and Amazon. On the same day, two digital versions will also be released–a sing-a-long version and an instrumental version of all 18 songs on the project. All products will be bundled and discounted at the His Kidz United website.

The His Kidz United series is slated to release four new volumes per year. Each album offers 16 popular favorites plus two bonus originals.

Parents of four themselves, His Kidz United founders Jimmy and Mai Swan recognized a gap in the supply of uplifting Christian music kids can truly appreciate. A labor of love transformed the best of CCM into an album with which their own children would quickly fall in love.

“Up until now, there have been no other products like His Kidz United CDs,” says Jimmy Swan, executive producer of the project. “Why wouldn’t parents want to invest in positive Christian music for their children? And while the music is focusing on kids ages 5 to 14, we’re finding that young adults and even parents enjoy listening to the music, too!”

In celebration of Holy Week, Worship Leader magazine is offering the song “Hallelujah” from the upcoming His Kidz United CD, Volume 1, as a free download to its audience this week. To download the song, visit (emailunlock.com/hiskidzunited/hallelujah or worshipleader.com).

“‘Hallelujah’ is an elegant song that uses the voices of children to drive home some of Christianity’s foundational beliefs: God’s love for us, His provision in our lives, and the good news that we belong to the Father,” says Jeremy Armstrong, managing editor of Worship Leader. “This is a perfect song for kids, even adults, to sing today, and made even more poignant as we prepare to celebrate Easter.”

Proceeds of His Kidz United CDs benefit the Dallas Neighborhood Art & Music School–also known as NAMS School of Music–where all of the tracks are recorded and produced with NAMS students performing on the series.

Swan felt it was paramount to have a consistent group of kids performing on the series, and his friendship with the school’s director, Levi Bradford, made the collaboration a natural fit.

“Kids listen to kids,” says Swan. “Parents are careful to teach their kids about ‘stranger danger.’ When an adult approaches a kid, they tend to get shy. But the minute another kid enters the room, there is an instant connection. As a parent, I want to impact my kids with spiritual messages and let them rejoice in the Lord. What is the best way to do this? Let them connect with their peers!”

Sales figures from recent kid-focused projects prove that adults invest in kids. The Frozen soundtrack from the animated Disney blockbuster film of the same name hit No. 1 on the charts and sold three million copies of the DVD right out of the gate, and the KIDZ BOP CD series released by Razor & Tie has sold more than 16 million units of its first 25 titles.

With the official April 29 release of His Kidz United, Vol. 1 just days away, the CD can be pre-ordered through major retailers.

“Our mission with this series is to give kids an opportunity to be encouraged, inspired and drawn to the Lord through the powerful tool of music, and give them something to relate to,” Swan says.

About His Kidz United:
His Kidz United is a music brand for kids ages 5-14, featuring today’s most popular Christian songs, performed by youth and targeting a youth audience. His Kidz United is a division of Jimmy Swan Productions, LLC, an integrated entertainment company involved with music, film and TV distribution, publishing, artist management and marketing.

From well-loved tunes such as the vibrant celebration chorus, “Shake,” to the worshipful tones of “10,000 Reasons (Bless the Lord),” or the driving declaration of “I Am” and the tight harmonies of “O Praise Him,” His Kidz United marries the dynamic energy of youth with the popular trends of proven hits.

For more information about His Kidz United visit HisKidzUnited.com.