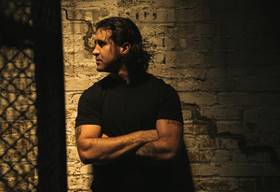 Grammy and Dove-Award winning artist Scott Stapp launched his “Proof of Life” tour last month, opening each set with his first No. 1 Christian radio hit, “Slow Suicide,” from Proof of Life, his second solo album that was released on Wind-up Records Nov. 5, 2013.  Receiving critical acclaim for the tour, Stapp is taking his fans on a journey through the new music alongside his mega Creed hits like “With Arms Wide Open,” “Higher,” “What If,” “My Sacrifice” and more.  The tour continues this month in the UK, Netherlands and Germany, followed by summer tour dates and his first-ever Christian music festival (Sonshine Festival) in the US. See www.ScottStapp.com for all the latest tour dates and ticket information.

During the first leg of the US tour, Stapp closed each set with the title track from Proof of Life.  The song is poised to become his second major Christian radio hit, debuting last week at No. 19 and moving to No. 15 this week on the Top 30 Billboard Christian Rock chart. The song is also “Most Added” for the second consecutive week.

“I had to present the incontrovertible proof of my life in a candid and honest way that revealed the real me,” says Stapp, regarding the song and key to the whole album.  “If I’ve been able to do so, the reason is all about recovering the strength of my faith—the faith that lets us see that we are not only protected, but nurtured and preserved by a love that knows no limits.”

“Victimhood did me in for years,” adds Stapp. “You couldn’t tell me that I was responsible for the choices I’d made. Yet, until I owned up to that responsibility, I couldn’t accept my story. My day-by-day recovery is anchored in the acceptance of my past as the necessary link to my present and future. When I sing, `You can’t deny the truth that hits you right between the eyes,’ that truth is rooted in accountability. And the most profound truth—as well as the most profound proof—is that I’m alive today because I’m accountable for my thoughts and actions as an imperfect human being.”

As Stapp plays live on tour the new hits from Proof of Life, produced by Howard Benson and mixed by Chris Lord-Alge, along with music from his first solo album, 2005’s certified platinum The Great Divide, and Creed fan favorites, here is how the critics have been responding:

“Scott Stapp is born again in so many ways.  Ever-present is the dynamic personality of the Creed frontman.  Ever-present is the soulful and powerful signature voice.  What is different, though, is a more mature, healthier, contemplative and wiser Stapp…His unassailable and poignant lyrics, of course, are a testament of his journey…Experiencing a Proof of Life tour show only leaves one wanting more.” – Broken Records Magazine

“Scott Stapp, founder and frontman for the popular band Creed, put on a great show…Scott both looks and sounds just as awesome, if not even more so, as he did the first time that I saw Creed perform at Reunion Arena in 2002. He captivated his fans with well-loved hits of Creed…along with songs from his newest solo album, Proof of Life.” – Dallas Live Music Examiner, 5-Star Review

“Stapp didn’t just provide plenty of bellowing modern rock aggression, but also sent listeners from all walks of life home with the assurance that liberation from any realm of darkness can begin with a simple act of surrender.” – CCM Magazine

“It looks like Scott Stapp has set himself free from his ‘own prison,’ and is embracing life to the fullest with his second solo album fittingly entitled Proof of Life.” – Huffington Post

“Filled with great music and energy, Stapp proved that he is a true rocker which can still put on an excellent performance.  Creed fans rejoice, Stapp is back and the Proof of Life tour 2014 was not to be missed.” – Cryptic Rock

“Sounding just like he did during the Creed era, his distinct voice is something to behold live…

Stapp was very energetic throughout the night…He was also interactive with the crowd during the 90 minute set, pointing at fans and seemed to be having a genuinely great time.” – Taco Shop Music

“Stapp’s voice was strong and clean…He also put 100% of himself into the set…Stapp’s emotions were conveyed on every note as he ripped through most of Proof of Life…fans should make an effort to catch this show. They won’t be disappointed.” – Madison Music Examiner

Proof of Life is Stapp’s first new material since the release of his 2012 uncensored memoir, Sinner’s Creed, in which Stapp shared his life story for the first time—from his fundamentalist upbringing, the rise of Creed, his ongoing battle with addiction, the rediscovery of his faith and the launch of his solo career.  The gripping memoir is “proof” positive for Stapp that a higher power is always present, despite the colossal messes we sometimes make of our lives.  Proof of Life is an 11-track collection of songs that chronicles the extension of his journey.