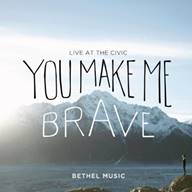 Bethel Music follows the success and impact of their first all-studio release Tides with a unique and no-less-powerful project, You Make Me Brave.  The CD and companion video chronicle the worship experience during a 3-day women’s conference held at The Civic in Redding, California in August. As the event was planned and executed, organizers realized it was transcending a typical church conference. Words were changing lives. Songs were moving hearts. Worship was erupting as voices were lifted and souls were renewed. Though participants were unaware, God had carefully woven a theme through the messages and music. The songs were written independently by a gifted team of worship leaders – Jenn Johnson, Kari Jobe, Steffany Frizzell Gretzinger, Kristene DiMarco, Amanda Cook, and Leah Valenzuela – but they took on a consistent character and a common voice. To 1,200 people at a conference, and to so many more who will watch and listen, the Spirit spoke: God is present. God is forever. God is for you, to give you strength and to make you brave.

Bethel’s growth and impact have accelerated in recent years as the ministry continues its transformation from local church music to global outreach, featuring a cadre of songwriters and worship leaders, a half-dozen CDs, chart-topping songs such as One Thing Remains, and both online and on-campus worship schools. Tides became the biggest retail debut ever for the worship ministry, reaching No. 1 on the Top Christian/Gospel Albums and Praise & Worship Billboard retail charts amidst unprecedented international acclaim. The momentum continued when Tides Live released in late February. The Women’s Conference is an annual event, but this year in particular, organizers recognized the powerful undercurrent of God’s work in the preparation, and they knew they needed to share it with the world.

“I think this project will serve two purposes,” says Jenn Johnson, who serves as Bethel’s Senior Worship Pastor along with her husband Brian. “I’m excited for people to listen and to hear what the Lord is saying to them personally through it, and then also to find that launch pad in each song to worship — to identify where they’re at with the Lord, and worship him from that place.”

God’s message in the music is spoken eloquently in the title track, a song from the heart of Amanda Cook, who recently moved from Winnipeg to be closer to her Bethel team. Amanda recalls the birth of the song “You Make Me Brave.” “The song took only a matter of minutes to write, but it was the result of a long, dry season God took me through to reach the point where I was able to express what He had been doing through the last number of years. God has themes in all of our lives and I feel like bravery is something that He’s always called me into.  I’ve struggled with fear my whole life. You name it, I’ve been afraid of it. The song is a very personal statement to me because it’s not written out of a place of declaration that ‘I’m so brave.’ I’m writing myself into that character, writing myself into the person that I really do feel called to be and want to be.”

The song opens the album with driving drums and vivid imagery of a crashing tidal wave.  “The water for me represents the presence of God, the expansiveness, the majesty, the wonder of who He is. The wave is His grace taking me deeper and further into His presence.” The song’s explosive bridge captures the fear we might feel when God calls us into a deeper level of intimacy with Him: You make me brave / You make me brave / You call me out, beyond the shore, into the waves.

Renowned songwriter and worship leader Kari Jobe joined the worship team with another song of extraordinary power, “Forever.” Co-written with Brian Johnson, the song traces the emotion of Christ’s crucifixion and resurrection as it was felt by both the eyewitnesses and by the universe itself. Through the sadness of the weeping moon and stars, captured on a somber piano, to the war on death that caused the earth to tremble, the song is a confident declaration of death’s defeat. The tumult and victory move the listener to bravely declare: We sing hallelujah! The Lamb has overcome!

Another standout song tells of a personal journey out of the busyness of life and into intimate communion with God.  Jenn’s “A Little Longer” opens with tension, as guitar notes unexpectedly descend a minor chord through each verse. That minor key recreates a scene Jenn recalls vividly. “I was getting ready to go lead worship in a conference at the church and I had so much going on. I was running around scrambling to get everything together, my little baby was sleeping, and I was just a mess. As I walked past the piano in our living room I felt the Holy Spirit saying, Sit down and worship. I thought, Are you kidding me, Lord? I’m going to worship you in like 15 minutes! I kept going and I remember coming back through the living room and I walked by the piano again. I was arguing with the Lord, but I knew it was Him. So I sat down at the piano, frustrated and annoyed, and in a minor key I just played, What can I do for you, what can I bring to you, what kind of song would you like me to sing? With an attitude. And the Lord almost audibly spoke to me: I didn’t want anything, I just wanted to be with you. And I sobbed. Snot and tears all over the piano. I scratched the lyrics down, put the baby in the car, and went to the conference. I told Bill and Brian that I felt like I needed to do this song, even though it was not even really written. I started singing the song that the Lord had given me and it starts out in that minor key and then the chorus says, You don’t have to do a thing, simply be with Me and let those things go. The whole room turned into snot and tears!”

These songs are so personal, but part of the beauty of the event was the corporate nature of the worship. The team worked diligently to shift the focus away from the individual and toward the object of our praise. In fact, there are plenty of moments on the CD when it’s difficult to tell who’s singing. “I think it’s awesome,” Jenn recalls. “I think it’s a value system. I love the ‘nameless, faceless’ thing. It’s beautiful to celebrate who someone is, but it can be so weird sometimes. I don’t have a false humility at all, but what was celebrated was what God was doing, not who was doing what. I really hope that people feel that the highlight is what the Lord is saying through the whole album versus who sang what, who did what, whose name is on what.”

Jenn’s enthusiasm for the project is palpable. “Personally, I’m more excited about this than anything that we’ve ever done. I might be a little partial, but these girls killed it! This would be my favorite album by a long shot, even if I wasn’t on it. I also don’t think this project is just for women. I think this is a message for the church.” That message is loud and clear. God’s presence is a promise for here and now, not a destination for which we long. And that presence should change us. Like an approaching wave, we see His wonder and His overwhelming love calling us to something more, something deeper, and though we might falter as we face the unknown, He makes us brave.