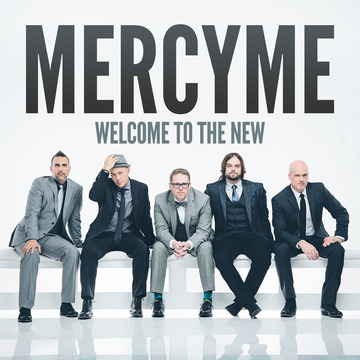 MercyMe’s Welcome to the New Nabs Highest Billboard 200 Debut Of The Week At No. 4

For Grammy and American Music Award winners MercyMe, the eighth time looks to be the charm as the 6.5 million+ selling band’s latest, Welcome to the New nabs the hightest debut of the week landing at No. 4 on the Billboard 200 and No. 1 on the Christian Albums chart. The album peaked at No. 3 on the iTunes® Overall Albums Chart and No. 1 on its Christian Albums Chart.

Following two weeks of promotional appearances across the country, MercyMe is set to perform their top 5 hit single “Shake” on NBC’s The Today Show April 22. The “Shake” music video has had nearly 2 million views on several video platforms. Fans of the band have been using the hashtag #MMShake to share their own videos and responses via Facebook, Twitter and Instagram.

Already praised by USA Today, Rhapsody, CCM and more, reviews are continuing to pour in celebrating Welcome to the New’s “fresh and stimulating sound…a party from top to bottom” (Worship Leader):

“Welcome to the New may be the multi-platinum band’s best effort to date” – Crosswalk.com

“Welcome to the New brings newness to a new level. The normally ballad-centered MercyMe has exploded with a fresh and stimulating sound on this latest release” – Worship Leader

“A highly eclectic collection of different sounds…one can only admire the amount of flair offered by the veteran band on their 8th album in throwing expectations out the door and giving something new.” – Jesus Freak Hideout

“Definitely one of my favourite bands ever, MercyMe have crafted a fine effort.” – Christian Music Zine

“When it’s all said and done, MercyMe have outdone themselves with this album…get ready for something big as MercyMe welcomes you to the new.” – The Front Row Report

Starting April 24, MercyMe will kickoff their headlining “Welcome To The New Tour” featuring Jamie Grace and Citizen Way. The tour will make 15 stops in select cities across the country through May 17. Tour details are below. For more information, visit their website below.

“Welcome To The New Tour” Dates:

About MercyMe:
Since their debut in 2001, GRAMMY®-nominated, American Music Award and multiple Dove Award winners MercyMe have sold over 6.5 million units in CD and DVD sales, garnered 25 No. 1 multi-format Christian radio singles and four consecutive mainstream radio hits with “I Can Only Imagine,” (No. 4 AC/Top 25 on Top 40/Hot AC), “Here With Me” (No. 4 AC), “Homesick” (Top 10 AC), and “So Long Self.” In 2009, Billboard named MercyMe’s “Word Of God Speak” the No. 1 Song of The Decade and the group the No. 1 Christian Songs Artist of the Decade, with an additional No. 1 as the Christian AC Song Artist of The Decade as one of the industry’s most notable talents. MercyMe made history as “I Can Only Imagine” surpassed 1 million digital downloads, making it the first song in Christian music to go platinum in the digital domain. MercyMe has sold out venues across the nation, including Radio City Music Hall, and has appeared on The Tonight Show, CNN, Fox New Channel’s Fox & Friends, ABC News, CBS This Morning and in the pages of Entertainment Weekly, The New York Times, USA Today, Billboard and more. Their eighth studio album, Welcome To The New, is available now.