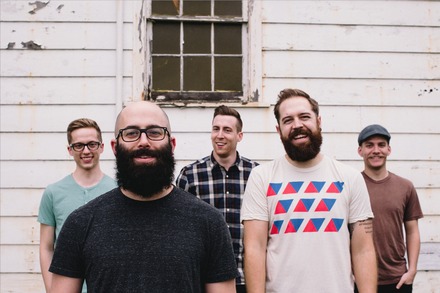 Mars Hill Music/BEC Recordings’ Citizens has released a brand new single this week in celebration of the life of Jesus as we near Easter this weekend. The single “You Brought Me Back to Life” is available now. Click here to get the new single at iTunes.

“This song was written with lyrics based on Romans 6,” shares Citizens frontman Zach Bolen. “We wrote a celebratory song that calls for God’s people to boast in the resurrection of Jesus Christ. We felt it important to have a song that was not only great for the church to sing during the baptism of a believer but also a song for the body to sing as a celebration of God’s steadfast love and glorious light that he has chosen to shine upon us as His redeemed people.”

Citizens had an amazing 2013 as they have sold nearly 20,000 units of their debut self-titled release driven by their radio success of the single “Made Alive.” The album debuted at No. 1 on the iTunes Christian and Gospel chart as well as debuted in the Top 10 on the Billboard Heatseekers and Worship Albums charts. The album was praised by Relevant, Worship Leader, CCM Magazine, and HM Magazine. The band is already working on their new album that will be released later this year – release date TBA.

“With our new album, you can expect a slightly different sound. Still Citizens, just revamped a little bit. There will be a good bit of upbeat songs but also a couple that are more contemplative. All in all, we want each of our albums to serve the local church,” shares Bolen. “We have always had the belief that if we try and make the message submit to the music then we are doing a disservice to the church and consequently watering down the truth. The art does not have more value than then the one who created art itself. So our hope is that with this next album you will hear and find that the music honestly and creatively underscores the beauty of the gospel. We will also be playing a couple dates over the next few months on the West Coast with the hope of doing some more in the future while still leading faithfully at our local church a couple times a month.”

Stay tuned for more information and details on the new album from Citizens!