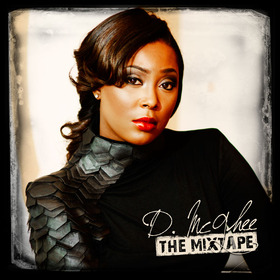 D. McGhee (Danielle McGhee) is another Memphis native who is stepping into Gospel and Christian music as a solo artist. Considered a new artist, yes, but D. McGhee was groomed for gospel music through her early years of singing with the Tennessee Mass Choir, Darrel Petties and Strength in Praise and many years of background work for Karen Clark Sheard, James Moore, Vanessa Bell Armstrong, Darwin Hobbs and Jennifer Holiday. Her affectionate and pure contemporary worship bravura, mixed with a unique urban contemporary blaze, topped off with a sizzle of Hip Hop has D. McGhee poised to take her place in the music industry as a fruitful solo artist.

D. McGhee’s new “Holy Ghost” single lyrically attests to the overwhelming convicting power of the Holy Spirit, while the video transports the viewer into a no holds barred praise party blast! Joined by Mr. Del and DMG label mates in the “Holy Ghost” video, D. McGhee delivers a flawless vocal performance and gives a taste of her passion for fashion, and trendy classy style.

“D. McGhee is a worshipper and an awesome talent,” says DMG CEO Delmar Lawrence. “She brings a style and grace with an urban appeal that gives worship a mainstream flava!” “Holy Ghost” is the first single release from D. McGhee’s debut release The Mixtape which is available on iTunes now.

D. McGhee’s got ‘Tha Holy Ghost’ and says her music is a new mix of essence for the Gospel and Christian music genre. “I’m representing Christ every day and every time I step out, whether it’s ministering, performing or most important, in my personal life,” says D. “I want to bring a different sound to Gospel and Christian music and also let people know you can be fashionably trendy doing it!” Expect to see more of D. McGhee in Gospel Music!