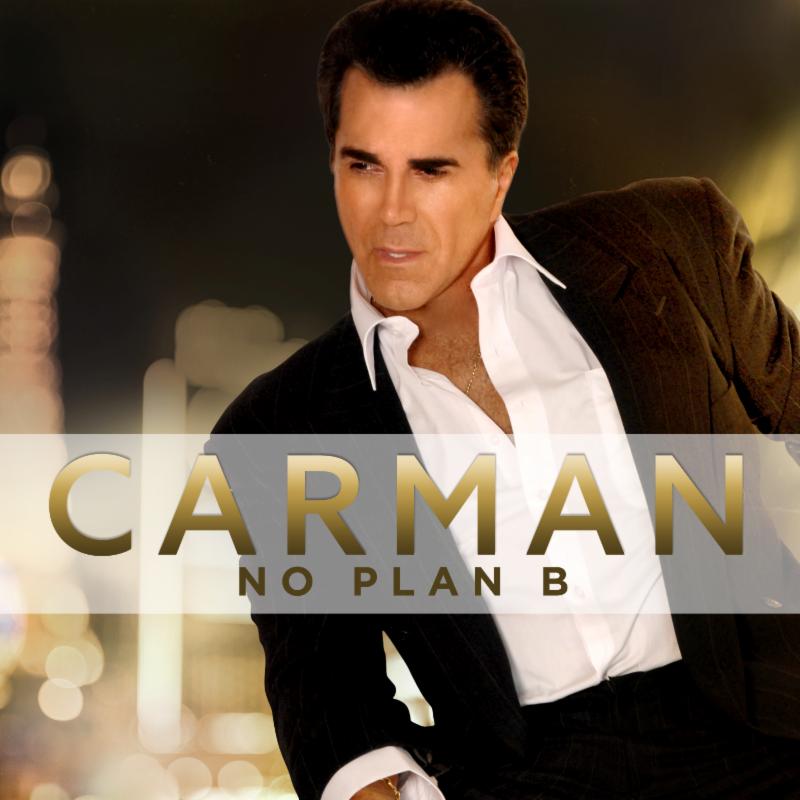 After a 10 year hiatus, Christian Music Trailblazer and Platinum-Selling Recording Artist Carman is set to release a new studio album, ‘No Plan B,’ on May 27 through his independent label Norway Avenue Records and Capital Christian Distribution. On May 13, the ‘No Plan B’ presale launches with an instant download track. In support of the new release, Carman hits the road May 29 on his ‘Live Across America Presents: No Plan B Tour’ making stops at venues across the country bringing new music to friends and fans nationwide.

“The main message of the whole album can be found in the title track, ‘No Plan B,’ which is how I’ve lived all these years,” said Carman. “Even if I only have a few more on this earth, I’ll still be preaching, giving altar calls, winning souls for the kingdom and singing the songs that have the power to bring deliverance into people’s lives, whether it be in front of 20 people or 20,000 people. God doesn’t call us to be popular. He calls us to be effective and that’s always been my goal, effective right up to the end. Jesus is ‘Plan A.’ There is ‘No Plan B.'”

‘No Plan B’ includes 12 tracks penned and performed by Carman, and produced by Carman and his production partners Ted T and Tre’ Corely. The CD and tour were made possible through the unprecedented fan response to the crowd-funding platform Kickstarter campaign he launched after opening up on social media about a cancer diagnosis in 2013. The campaign was wildly successful – the second most funded Kickstarter music campaign ever – and set the tone for the momentum behind the release of ‘No Plan B’ and major national tour, ‘Live Across America Presents: No Plan B Tour.’ Carman found a renewed vision and purpose for his ministry when the fans spoke, and a Carman buzz was rekindled that inspired the artist to record a new CD and tour again.

“I was diagnosed in 2013 and was planning on having 2-3 good years left, but I didn’t want to keep it a secret,” confirmed Carman. “I posted the news on Facebook and wanted to be honest and upright about it with anyone who asked. So many people started sharing stories of what they went through and posted photos of their heads wrapped up because their hair was gone. When I hear a story like that, my instinct is to reach out and cheer them up.”

Carman’s collection of songs features the title track “No Plan B,” and “God Made Man,” the latest of Carman’s many cheeky character songs featuring a “Sopranos”-styled mob cast, but with an Italian accented narrator who’s wholeheartedly committed to Christ, the gripping patriotic ballad “The Flag,” which sends a very well-timed reminder that we will always be “one nation under God” and our faith can never be silenced, and an updated version of “Jesus Heal Me” with new production, a true touchstone of the album that’s bound to continue its role as a concert standard.

“I’ve always sought to minister to the best of my ability. I wanted to help win as many souls for the kingdom as I possibly could,” sums up Carman. “Now I meet people who say ‘my life was so messed up 20 years ago, but I went to your concert, got saved and now I’m a worship pastor.’ Stories like that just go to show you how somebody’s life can completely turn around. I’m like a soldier who serves their country. I just want to serve people, and if just one guy gets it, then it’s all been worth it.”

The first set of dates for Carman’s ‘Live Across America Presents: No Plan B Tour’ are on sale at iTickets.com. For the latest on ‘No Plan B’ and the tour, visit Carman.org.

‘No Plan B’ track listing:

ABOUT CARMAN:
He was the only Christian artist able to fill stadiums all the world over, from record holdings like 72,132 people at Texas Stadium, over 50,000 in Johannesburg, South Africa, and another 80,000 in Chattanooga, Tennessee. A grand total of 4.5 million cumulative fans attended three national tours, including his extensive “Heart Of A Champion” tour. He’s collected the most names of any American citizen, one million signatures, on a petition supporting prayer in public schools and had more than one million people accept Christ salvation at his events.  Add in seven Dove Awards, a quartet of Grammy nominations, plus 16 RIAA Certified Platinum and Gold albums and videos amassing to well over 10 million cumulative career record sales, and Carman isn’t just one of the most decorated artists within faith-based circles, but quite literally one of the most flourishing, innovative and influential artists of all time. More than a singer, songwriter, video pioneer, speaker and all around evangelist, Carman branched out into many TV and movie roles, such as “Carman: The Champion” or guesting on “The Bobby Jones Gospel Hour” (which was the most watched gospel show on the BET network in 20 years!) He also broke ground as the first ever Christian music artist to write and release an action adventure novel (“Undefeated: In Love and War”) and even joined the likes of President and Mrs. Reagan and Dr. Billy Graham as a House of Hope Humanitarian Award recipient. Carman’s discography includes acclaimed albums such as ‘The Champion,’ ‘Revival In The Land,’ ‘Addicted To Jesus,’ ‘The Standard,’ ‘R.I.O.T. (Righteous Invasion of Truth)’ and ‘Mission 3:16.’ ‘No Plan B’ is available in May 2014.