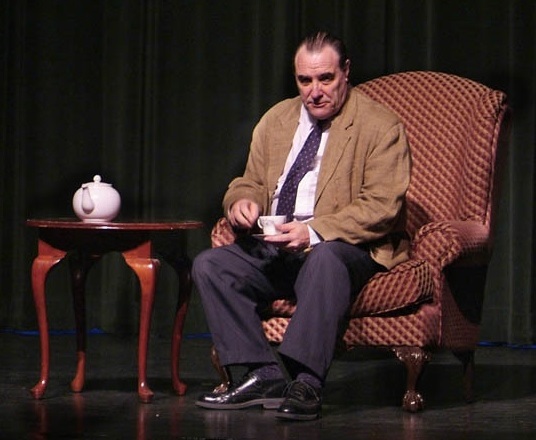 David Payne’s An Evening With C.S Lewis US Tour Kicks Off Next Week

The U.S. tour featuring British actor David Payne, who travels the world with his one-man show titled An Evening With C.S Lewis, in which he portrays the legendary author, poet and Christian philosopher C.S. Lewis, kicks off April 3 in Athens, Ga.

Payne, who has portrayed Lewis more than a thousand times for audiences all over the world, is renowned as the premier portrayer of the famed theologian. He is a favorite of The C.S. Lewis Foundation and regularly performs at its U.S. conferences and Oxbridge, the organization’s worldwide tri-annual conference in England.
The first leg of Payne’s 2014 U.S. tour, presented by CCM Forever, begins Thursday, April 3, at the Morton Theatre in Athens, Ga., for a series of dates. Following are additional dates:
Friday, April 4, at the Dothan Opera House in Dothan, Ala.; Saturday, April 5, at the Walker Community Theatre in Chattanooga,Tenn.; Sunday, April 6 at the Grand Opera House in Macon, Ga.; Tuesday, April 8 at Lyric Theatre in Lexington, Ky.; and Wednesday, April 9, at Jefferson Center in Roanoke, Va.
Ticket prices in all markets are $20 (Economy), $30 (Premium) and $40 (VIP seating plus Meet & Greet with Payne) plus taxes and service fees, except in Dothan, where the ticket prices are $21, $31 and $41 including fees. Show times in each market will be 7 p.m. except for Sunday, April 6, in Macon, which will start at 6 p.m.
“I am honored to return to the U.S. in my role of C.S. Lewis to bring An Evening With C.S. Lewis to audiences of all ages,” says Payne. “Mr. Lewis has influenced several generations with his writings and theology and I am humbled to portray this amazing man.“

Lewis, poet and author of The Chronicles of Narnia and Mere Christianity, is considered by many to be one of the literary giants of the 20th century.

Payne stumbled into his role as C.S. Lewis when he read an advertisement that said, “Auditions for Shadowlands. British accents a help!” in 1996 for a theatrical production to be staged at Nashville’s Tennessee Performing Arts Center. Payne, who had never been onstage before, decided to audition in hopes of landing a minor part. He surprised everyone–including himself–when he won the lead role. The rest, as they say, is history and a successful acting career had been launched.

Payne has played Lewis in a number of productions of Shadowlands, in his self-penned Weep for Joy and St. Jack and the Dragon stage productions, and in more than 500 presentations of An Evening With C.S. Lewis. He has had many voiceover commissions and narrated the entire Bible for the audio version of the new Holman Christian Standard Bible.